Child’s mother and stepfather, who are accused of her murder, say she fell down stairs 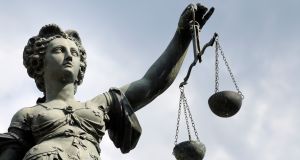 A five-year-old girl allegedly murdered by her mother and stepfather suffered head and abdominal injuries at forces similar to those exerted in road traffic collisions, a court has heard.

A five-year-old girl allegedly murdered by her mother and stepfather suffered head and abdominal injuries at forces similar to those exerted in road traffic collisions, the High Court in Belfast has heard.

Prosecutors said examinations carried out on Nadia Zofia Kalinowska after she was discovered at the family’s home in Newtownabbey, Co Antrim revealed evidence of multiple fractures at various stages of healing.

Details emerged as the child’s mother Aleksandra Wahab (26) and stepfather Abdul Wahab (31) applied or for bail. The couple are currently in custody charged with Nadia’s murder on December 15th last. They also face charges of causing or allowing the death of a child, and grievous bodily harm with intent to Nadia over a year-long period.

The husband and wife, originally from Pakistan and Poland respectively, deny all charges against them and claim Nadia sustained the injuries when she fell down a flight of stairs at their home on Fernagh Drive.

Ms Wahab reported hearing a bang in the middle of the night and finding Nadia at the bottom of the stairs.

Crown lawyer Fiona O’Kane said head and abdominal injuries were the cause of Nadia’s death. She said X-rays and a postmortem established severe fracturing to the skull and a bleed over the entire surface of the brain. Other fractures were found on other parts of the girl’s body, some of which were older than others, the court heard.

Ms O’Kane said medical opinion suggested the extent of the injuries was beyond what would be caused by a fall down stairs. “The head and abdominal (injuries), some of those would normally be exerted in road traffic-type forces.”

Ms Wahab’s barrister Gavyn Cairns said there was no evidence that Nadia suffered any non-accidental injuries.

Mr Cairns argued that school staff recalled Nadia being a happy girl who was prone to falling over and bumping into things. “The common thread running through all their evidence is this was a very clumsy child,” he said.

With a final pathology report potentially a year away, the couple are seeking bail but adjourning their applications, Mr Justice Horner directed that all interim findings, scans and X-rays must be handed over first.