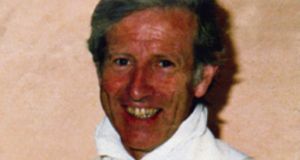 Fr Niall Molloy died in Clara, Co Offaly, in July 1985. A high-level Government-commissioned review has concluded that no further inquiry into the matter is warranted because the passage of time makes it impractical.

The Garda’s review of a contentious inquiry into the killing of Fr Niall Molloy in Co Offaly in 1985 has been vindicated.

A high level Government-commissioned review has concluded that no further inquiry into the matter is warranted because the passage of time makes it impractical.

Fr Molloy was found dead in the home of Richard and Therese Flynn in Clara, Co Offaly, on July 8th, 1985.

Richard Flynn was charged with manslaughter and assault, but was acquitted during a subsequent trial.

Following claims - mainly in newspaper coverage five years ago by journalist Gemma O’Doherty - that witnesses with information were not taken seriously and that the investigative process was not conducted properly, the case was re-examined.

A Garda Serious Crime Review Team (SCRT) led by Det Supt Christy Mangan conducted the inquiry and sent a file to the DPP, who directed no charges be pursued.

However, the journalist who had raised the concerns and some members of the Molloy family again expressed doubts that the person they said was responsible for Fr Molloy’s death was not properly investigated.

They questioned the veracity of the review process.

It has found no issues with the review and Minister for Justice Frances Fitzgerald said no further investigation is warranted.

The delay in alerting the emergency services after Fr Molloy was found dead remains unexplained and those with information on that issue are reluctant to speak out, are too infirm or have died.

Mr McGinn also concludes the fact business dealings between Mr Molloy and the Flynn family were not disclosed to the investigating team from the outset was unusual.

It also said in light of the confession by Richard Flynn to directing violence at Fr Molloy, the directed acquittal of Richard Flynn at trial was extraordinary.

The report also concludes with the passage of 30 years since Fr Molloy’s death, some witnesses have been reluctant to co-operate and others have died. Because of this, no further inquiry would be helpful.

“First and foremost, we need to acknowledge, as this report does, that this case involves the tragic death of Fr Niall Molloy, a man much loved by his family and by those in the community,” said Ms Fitzgerald.

“Mr McGinn’s report does an important service in outlining in considerable detail the background to the case.

“It brings greater clarity to many of the issues raised regarding the case, and outlines how some of the concerns expressed are simply not supported by evidence.

“It sets out shortcomings in the original investigation which were identified by the SCRT review.

“The report does not answer all of the questions raised, however, and concludes that the precise events surrounding Fr Molloy’s death cannot now be ascertained.

“In these circumstances, Mr McGinn recommends that examination by a further inquiry would not be warranted.

“In accepting this recommendation, I fully appreciate that it will come as a disappointment for Fr Molloy’s family and for those who have campaigned on their behalf.

“I hope they will accept, however, that a considerable level of detail is being put into the public domain, and that every effort has been made to answer as many questions as it is possible to do.

“As Minister for Justice and Equality, I know that it is not always possible to obtain answers for families who have lost a loved one in violent circumstances.

“The grief felt by families in these circumstances is greatly compounded by not knowing precisely what happened, and not seeing someone unambiguously held to account. I sympathise deeply with Father Molloy’s family and others who have faced this.

“Ultimately, however, I have to determine whether further inquiry would be warranted in the public interest and would have some prospect of success.

“In this instance, based on the work of the SCRT and Mr McGinn’s careful analysis, I must conclude that it would not.”