Crimestoppers says fear of crime exceeds risk of being victim 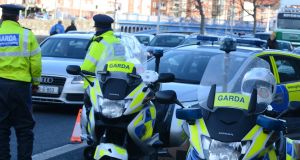 “There is probably a temptation sometimes to politically use crime; that’s a part of politics,” says Tim Dalton of Crimestoppers. “But this country, relative to other countries, is a pretty safe place to do business and to live. It’s not quite as bad as the fear would suggest.” Photograph: Cyril Byrne

The risk of becoming a victim of burglary is exaggerated in the Republic, but the Garda and other State agencies were compelled to respond to that fear, a meeting of the Crimestoppers organisation has heard.

Chairman of the organisation Tim Dalton said he accepted the public’s fear of crime was much greater than the likelihood of becoming a victim.

“That has always been a fact but you still have to react to it,” he told The Irish Times. “Crime in this country, in comparison to other countries, is relatively low. But the fear factor is probably the same as in other countries. Part of that may be to do with the fact that our past has been a society where crime was virtually non-existent.”

“Vicious crime” sent panic through communities, especially among older people, he said. He added that “there is an over-exaggeration of crime”.

Mr Dalton was speaking at the launch of a campaign to encourage members of the public to be vigilant to suspicious activity in their areas and to report it to the Garda.

The campaign by Crimestoppers, which advises on crime prevention and urges the public to supply information to the Garda, is aimed at the period to Christmas which often sees a spike in burglaries.

Assistant Commissioner Derek Byrne, who is in charge of national support services including the specialist Garda units, said the force was very “attuned” to the public’s concern around rising burglary trends. Burglary increased by 16 per cent from 2007, when it reached its lowest point for over a decade, to the end of last year. Data for the first half of 2015 revealed a further rise of 4 per cent.

The number of aggravated burglaries, where violence or the threat of violence was used, was much lower. In 2007, for example, there were 255 such crimes, increasing to 317 last year.

The highest number of aggravated burglaries was recorded in the Dublin Metropolitan Region (DMR) West division last year, with 39 offences. This was followed by DMR Northern, with 34 offences, and DMR Southern with 33.

Of the remaining 25 Garda divisions, there were 10 or fewer aggravated burglaries in 17 divisions last year and eight divisions witnessed between 11 and 15 offences.

More resources were being invested in the Garda in additional recruits entering the Garda College and the provision of vehicles, including high-powered cars to track travelling burglary gangs, he said.

Mr Byrne added that schemes such as text alerts – where community groups warned people in their area and local gardaí of suspicious activity immediately it was witnessed – had the potential to greatly aid the Garda. “We need the calls, we need the input; for people to tell us there is suspicious activity and allow us devise a response strategy.

“In the run-up to Christmas, seasonal trends inform us that invariably there will be an increase in burglaries. We’re very attuned to that, and we have operational plans in place to increase our patrols in our attempts to address this developing trend.”

He insisted the Garda had taken note of the recent debate around burglary and public meetings at which concerns about rural crime had been expressed.

He said gardaí on patrol understood the need to react to emergency calls with great urgency.