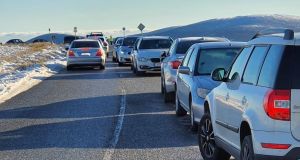 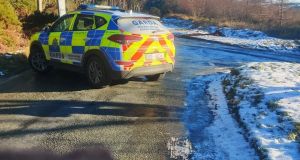 A network of checkpoints has been put in place and people were being turned away from the uplands. 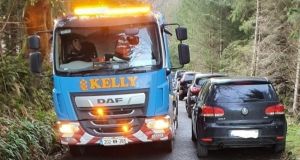 Gardaí are conducting an intensive operation in the uplands of Wicklow to stop people going there to exercise and view the snowy conditions, despite the 5km from home rule in place. Vehicles were also being towed away for illegal parking and blocking access.

A network of checkpoints has been put in place and people were being turned away from the uplands, while several towing trucks had been deployed by the Garda to tow vehicles away on Sunday.

Some of the tow trucks were taking away two vehicles at a time; one on the back of the towing vehicle and another being towed behind.

Cars towed away and taken to a pound are released to drivers after a €150 fine has been paid. If the vehicles are not collected and the fee paid on the day of towing, an additional charge of €50 per day applies.

One Garda source familiar with the operation said gardai would have towed more vehicles away but the manner many cars had been parked blocked access for the tow trucks.

“The operation today (Sunday) seems to be working; it’s a lot better today with fewer people up there,” said the source.

“Aside from Covid-19, the conditions on the Sally Gap and Wicklow Gap this weekend are totally unsuitable for people walking or driving, it’s crazy that people would go there. And the area around the Hell Fire Club in the Dublin was also a disaster with so many people.”

“Some of the gardaí involved in this operation have been based in this region for years and they said they had never seen anything like the volume of people up there yesterday; that the numbers wouldn’t even allow for social distancing despite the vastness of the area.”

“You are talking about thousands of people going there, so compliance (with Covid-19 restrictions) wasn’t great. But the operation we have seems to have deterred more people today.”

Gardaí have also warned that conditions for driving in the Wicklow uplands were treacherous and unsuitable for walking and sightseeing, with vehicles blocking access routes for emergency vehicles creating additional risks.

“Gardaí will once again be in the uplands today trying to control a repeat of the huge volumes of traffic that arrived yesterday,” the Wicklow Garda division said on Sunday morning.

“Checkpoints are in place at various areas on approaches and in the uplands themselves. Emergency vehicles would not have been able to access several areas yesterday due to obstruction caused by illegally parked cars. Several cars were towed.”

In reply to queries from The Irish Times, Garda Headquarters said the ongoing operation underway in Wicklow was part of Operation Fanacht, which aims to enforce the 5km from home rule.

“Local gardaí will once again be in the uplands today trying to control traffic volumes and checkpoints are in place on approaches and in the uplands themselves,” it said, adding the vehicles being towed were parked in a manner than would block access for emergency vehicles.

Other vehicles that were parked illegally, but not blocking access, had been dealt with via a fixed charge notice for illegal parking.