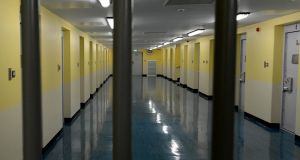 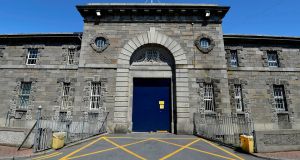 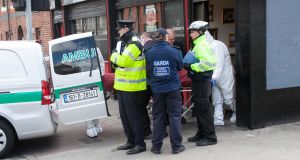 Gardai with the remains of a Michael Barr who shot dead at the Sunset House pub in Summerhill, in Dublin on Monday. Photograph: Collins 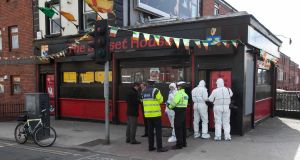 Gardai outside the Sunset House pub in Summerhill, in Dublin where a man was shot dead on Monday. Photograph: Collins

The Kinahan-Hutch gangland feud had resulted in extreme violence in Mountjoy Prison, Dublin, recently and urgent action is needed to isolate rival gang members from each other, prison officers have said.

The Prisons Officers’ Association (POA) said its members were forced to rush into an exercise yard in the prison in recent months and break up an attack by one group of prisoners on a criminal aligned to an opposing faction.

POA president Stephen Delaney said while his organisation had raised the problem of gang violence in the past, he believed it may be hard because of the media and Garda attention now focused on the feud, though prison gangs had long made an “absolute hell” of the lives of weaker prisoners.

Mr Delaney said at the opening of the association’s annual conference in Athlone on Wednesday night the worsening gun feud was tragic, but insisted its members were experiencing some of the fall-out.

“In one such case, three of our colleagues went into a crowded Mountjoy exercise yard where a relation of one of the main protagonists in the current feud was being hacked to pieces,” he said.

“The three officers, using bare hands and courage only, pulled him from certain death.

“But for prison officers, the obvious question is why are vicious gang members allowed to congregate and carry out such an assault?”

Mr Delaney said it should not be left to prison officers to run into serious outbreaks of violence and pull feuding gang members apart.

“Why have we not established a system of isolation, where membership of these gangs has a limiting benefit, and based upon hard-earned Garda and prison-based intelligence, these gangs and their members are isolated and kept apart from the general prison population?

“If we reduce the power of these gangs in prison we also restrict their capacity to control matters on the outside – so all of society will benefit.”

The feud that has now spilled over into the prisons claimed its first life last September in Spain when the Kinahan gang shot dead Gary Hutch (34).

From Dublin’s north inner city, Hutch was once a member of the Kinahan gang but was accused by it of being a Garda informer. Since his murder, his associates back in Dublin have been feuding with the Kinahan gang members.

The POA did not reveal the identities of those involved in the exercise yard incident or when it had occurred.

However, The Irish Times understands the victim was on the Hutch side of the feud and the group of attackers was aligned to the Kinahan side.

The attack occurred not long after David Byrne (33), Crumlin, Dublin, was shot dead in the Regency Hotel, Drumcondra, in early February and Eddie Hutch (58) was shot dead in revenge three days later at his home on Poplar Row, Dublin 1.

Since then, the Kinahan gang has shot dead Hutch associate Noel Duggan (55). He was killed while sitting in his car in the driveway of his home last month in Ratoath, Co Meath.

The violence has also impacted on those unconnected with the gangland feud. Martin O’Rourke, a 24-year-old Dubliner, was also shot dead by the Kinahan gang earlier this month.

He was fatally wounded in a botched attack at Sheriff Street in Dublin’s north inner city by a gunman who mistook him for a Hutch associate.

The same gang shot dead Michael Barr (35) while he was working in the Sunset House pub in Summerhill, Dublin 1, on Monday night.

While dissident republican Barr, a father of young children from Strabane, Co Tyrone, was linked to the Hutch side of the dispute and was suspected of helping to source the AK47s used in the attack at the Regency, he was not the primary target of Monday’s attack.

Gardaí believe a Hutch gang member was in the pub and escaped the attempt to kill him.