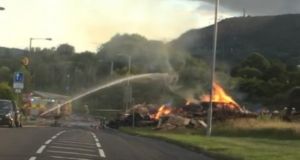 One man has been arrested after disturbances in Carrickfergus, Co Antrim on Friday. Photograph: Heloise/Twitter

One man has been arrested in Co Antrim after a gang of masked men wielding hammers and a crossbow gathered in a housing estate in Carrickfergus on Friday.

Police were called to the Castlemara estate on Friday evening after reports that a large crowd of masked men had gathered there and were carrying hammers.

Scenes in Carrickfergus last night as riot police dealt with disturbances in the Woodburn and the Castlemara estate. pic.twitter.com/Fw1PwHPOUg

In a statement from the Police Service of Northern Ireland, Superintendent Emma Bond said: “Reports suggested some of the males were masked and may have been armed with weapons such as hammers.

“Officers attended and dispersed the crowd seizing a number of items including a crossbow.”

A 36-year-old man was arrested and remains in custody on Saturday morning.