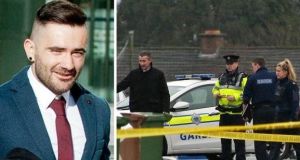 A fourth man has been arrested in connection with the murder of Vincent Ryan (L) in Finglas last month.

A fourth man has been arrested in connection with the murder of Vincent Ryan last month.

Gardaí in west Dublin arrested a man in his 30s on Saturday and he is currently being held at Blanchardstown Garda Station under Section 50 of the Criminal Justice Act.

Three people remain in custody in relation to the investigation- two in Blanchardstown and one in Finglas- and another man was released on Thursday after he was arrested earlier in the week.

Mr Ryan (25), the brother of murdered Real IRA chief Alan Ryan, died in hospital after he was ambushed and shot a number of times as he sat in a car outside his partner’s home in Dublin.

Mr Ryan was sitting in a white Volkswagen Golf at about 3.15pm on February 29th after dropping his partner and infant child to their home on McKee Road in Finglas.

Another car pulled up alongside him and an occupant fired a number of shots into Mr Ryan’s car, hitting him in the head and body.

The attackers’ car sped from the scene and was later found burnt out in Co Kildare.

Mr Ryan had been warned his life was in danger, and this was the second time in a few months he had been targeted.

Gardaí have asked members of the public who may have information in relation to the shooting to contact Finglas Garda Station on 01 666 7500, the Garda Confidential Line on 1800 666 111 or any Garda station.