Men taken in for questioning about dissident terrorist activity 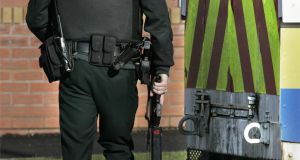 Four men were arrested today after a series of bomb hoaxes caused traffic chaos in Belfast.

They were detained when a car was stopped in the Andersonstown area of the city, close to the M1 motorway, part of which was closed for a time because of the security alerts.

The four men - two aged 26, one aged 25 and the fourth, 53, were taken in for questioning about dissident terrorist activity, according to the PSNI.

A number of properties in west Belfast were also searched as part of the investigation.