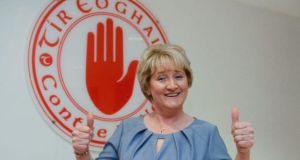 Roisin Jordan: became the first woman county chairperson in GAA history after getting the top job with Tyrone in 2014. Photograph: tyronegaa.ie

The first woman to chair a GAA county board has settled a libel action over claims of “penny-pinching” within Tyrone’s association.*

Roisin Jordan declared herself fully vindicated by the resolution reached at the High Court in Belfast.

Mrs Jordan was elected chair of Tyrone County Board in 2014 and served in the role until 2017. She sued the parent company of Dublin-based radio station Newstalk over an article which appeared on its website in February 2017.

Based on an anonymous email claiming to be from a Tyone senior footballer, the piece made a number of criticisms about alleged spending cuts.

The action was listed for a two-day trial before Mr Justice Maguire. But following out of court negotiations, the judge was informed that a settlement had been reached.

As part of those terms a “clarification” statement was read out on behalf of the defendant, News 106 Ltd. Gerald Simpson QC told the court: “Newstalk.com published an article on February 23, 2017 headed ‘Tyrone footballers: County Board penny-pinching hurting morale’.

The statement continued: “While we published the article in good faith based on information from a number of trusted sources, we do acknowledge that despite our best efforts we have been unable to verify the source of the email which prompted the article.”

No further details of the terms of the resolution were disclosed.

Outside court Mrs Jordan said: “I’m very pleased that today’s case has been settled in my favour.

“When I was appointed as the first female chairperson of any county in Ireland I carried out my duties as a volunteer to the very best of my ability, and in the interest of everyone within Tyrone GAA.

“For someone to try to undermine me in my job was very disappointing, and led to me bringing this court case.

“I’m pleased that it’s now over and the outcome has fully vindicated me.”