Fisherman’s body found by his son in west Cork

The man, originally from Spain, had been living in Ireland for several years 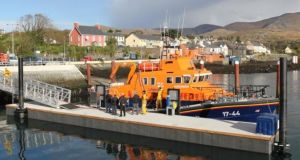 A Spanish fisherman, who has been living in Ireland for several years, has died following an accident at Castletownbere Harbour in West Cork Wednesday.

The man, who was in his late 50s and living in the town, was found in the water by his son at the Town Pier in Castleltownbere around 8pm this evening.

It is understood that the man was seen alive at around 7pm when he headed back to his trawler for a rest.

It is believed he may have slipped when boarding the boat.

The emergency services and gardaí were alerted but a local doctor pronounced the man dead on the pier and his body was removed to Cork University Hospital for a post-mortem.