Fine defaulters make up more than half of those jailed 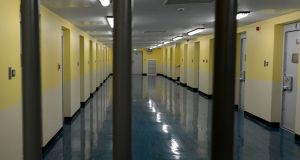 The number of people being sent to prison for the non-payment of fines has, for the first time in the Republic, exceeded half of all prison committals. Photograph: David Sleator/The Irish Times

The number of people being sent to prison for the non-payment of fines has, for the first time in the Republic, exceeded half of all prison committals.

A new report on prisons policy in the State has also revealed the rate of increase in fine defaulters as a percentage of the total prison population is at runaway levels.

The authors of the new Strategic Review of Penal Policy have recommended the Probation Service “examine the feasibility” of the introduction of more sophisticated forms of community service. They would incorporate orders restricting an offenders movement and/or instructing them to attend addiction treatment.

The review group has also expressed concern that the number of women being sent to jail is increasing despite the overall prison population falling.

For example, in 2009, females accounted for nine per cent of all committals to prison, but last year it had grown to 15 per cent.

The review group has expressed concern at the level of overcrowding in the women’s Dochas Centre prison on the Mountjoy campus in north Dublin and also at the condition of facilities for women in Limerick Prison.

Minister for Justice Frances Fitzgerald said while she supported many of the group’s recommendations around the better use of non custodial sanctions and calls for a general reduction on the prison population, she believed serious criminals should spend lengthy periods in jail.

She described as a “good recommendation” the call by the review group for judges to adapt non custodial sentences as their default policy and to supply reasons in writing in cases where jail terms are imposed.

“European courts say to us transparency is important, so if you give written reasons as to why you are suggesting imprisonment is the appropriate sentence that I think... would be helpful in terms of consistency.”

The group that compiled the new report was appointed by former minister for justice Alan Shatter two years ago to examine all aspects of prison policy.

It was comprised of a large group of experts on penal policy including officials from the Department of Justice, Irish Prison Service, Irish Penal Reform Trust and Probation Service. among others.

Among other recommendations are:

l- The use of open prisons for proposed new weekend sentences.

l- The establishment of the Parole Board on a statutory footing.

l-More research be conducted into the needs of female prisoners, including ensuring great contact between the women and their children.

l-The introduction of a new system where community service would replace a portion of a prison term after 12 months in jail.

l-The expansion of community return; an early release programme for low risk offenders who have demonstrated a commitment to rehabilitating in jail.

l-Prisoners jailed for serious crimes such as drugs and firearms offences to be allowed to apply for temporary release.

l- Increased use of open prisons, especially the provision of such a facility in the Dublin area and one for women prisoners.

l- More transparency around how prisoners can secure transfer to open prisons prior to release and places on an incentivised regime where good behaviour is rewarded with enhance conditions.