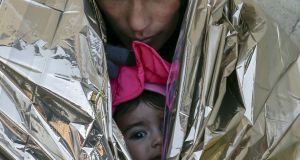 A migrant wrapped with her child in a thermal blanket waits for a train to Croatia at a train station in Presevo, Serbia, this week. Photograph: Marko Djurica/Reuters

Fifty-nine Syrians and 139 Afghans were denied entry to the State by immigration officials last year.

Figures released by Minister for Justice Frances Fitzgerald also show 11 Eritreans and 44 Iranians were refused permission to enter the State at ports and airports in the year up to December 15th last.

Citizens from all four states have been among those granted refugee status here in recent years.

Ms Fitzgerald could not say why any of the individuals were denied permission.

In response to a parliamentary question from Sinn Féin justice spokesman Pádraig Mac Lochlainn, she said a breakdown was not “readily available” and that retrieving individual records would involve “disproportionate” expenditure of time and resources.

The Immigration Act 2004 sets out 11 grounds on which an individual can be refused permission to enter the State, including if the he or she has a previous conviction for a serious offence, is not in possession of a passport or intends to travel on to the United Kingdom.

An immigration officer may also refuse permission to a foreign national if satisfied the individual’s entry or presence in the State could pose a threat to national security or “be contrary to public policy”.

Ms Fitzgerald said everyone who is refused permission to enter the State was given a notice in which the reason or reasons were set out.

She said all such people were returned to their point of embarkation, which in most cases was within the EU. “I would point out in relation to the countries concerned that no commercial direct flights to Ireland are available from these countries,” she added.

Asked whether those Syrians, Afghans, Iranians and Eritreans who were refused permission to enter the State last year had been advised that they could apply for asylum, a spokesman for the Department of Justice said: “Ireland is in full compliance with the Refugee Act and its obligations to the UN.

“Immigration control officers have received information and training from experienced officials in the Office of the Refugee Applications Commissioner. ”

The Refugee Council said it was concerned by the figures. Citing an estimate by the UN refugee agency that 75 per cent of Syrians and Eritreans require international protection, the council’s chief executive, Sue Conlan, said this meant the State had potentially turned away about 50 refugees last year.

“We regret that they were refused leave to land and not admitted to the State to have their protection needs assessed,” she said.

Ms Conlan also expressed concern that people are refused permission to enter the State without access to lawyers or legal information.