Father was cleared to return home after psychiatric assessment 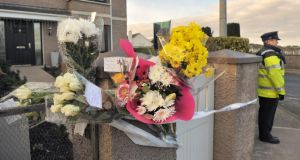 A man who stabbed his wife to death and seriously injured his daughter before taking his own life was assessed as posing no risk to his family by a psychiatrist who recommended that he be allowed to return home.

Michael Greaney had been required by a court to reside away from the family home at O’Neill Place in Cobh, Co Cork, and to obey the directions of a consultant psychiatrist after he was found not guilty by reason of insanity of assault causing harm, and false imprisonment.

The 53-year-old gave the undertaking to live away from the family home but in October his lawyers made an application to Cork Circuit Criminal Court seeking to have the requirement lifted so that he could return to live with his wife, Valerie (49) and two daughters, Michelle (21) and Sarah (16).

No longer a risk

Judge Seán Ó Donnabháin said he needed to read the report by the consultant psychiatrist and he adjourned the matter for a number of hours before granting the application lifting the requirement that Mr Greaney live away from the family home.

“In view of the medical report, I will release Mr Greaney from his undertaking not to go back to the house,” said Judge Ó Donnabháin, who also heard that Mr Greaney’s family were also anxious for him to return home and the State had no objection to the requirement being lifted.

On Sunday, Mr and Mrs Greaney were found stabbed to death at the family home, while Michelle Greaney was found lying on the roadside outside in a critical condition after being stabbed in the chest.

The alarm had been raised after Valerie Greaney sent her younger daughter to a neighbour’s house to contact gardaí. Gardaí believe that Mr Greaney attacked both his wife and older daughter before taking his own life.

The deaths, described by gardaí as “a tragic family incident” followed a turbulent period in Mr Greaney’s life which saw him detained for six weeks in May and June 2013 at the Central Mental Hospital in Dundrum, Dublin before being released on bail by a court.

In February of this year, Mr Greaney went on trial at Cork Circuit Criminal Court on assault causing harm and false imprisonment charges but after his acquittal by a jury by reason of insanity, Judge Ó Donnabháin remanded him to the Central Mental Hospital for assessment.

Mr Greaney was detained at the Central Mental Hospital from February 25th to March 20th, when he returned to Cork Circuit Criminal Court and again appeared before Judge Ó Donnabháin.

However, he was discharged from court on the undertaking that he live away from the family home and obey the instructions of a consultant psychiatrist. He abided by this until October, when he successfully applied to return home.