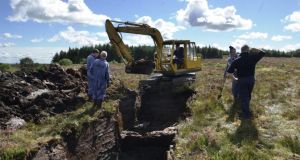 Gardaí excavating a site in Co Monaghan as part of the search for the body of Columba McVeigh. Photograph: Brenda Fitzsimons 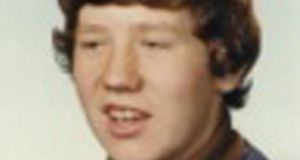 Columba McVeigh: soon after the Belfast Agreement was signed, the IRA admitted killing the teenager 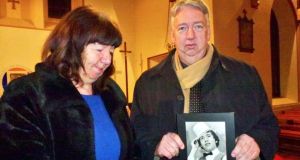 It is just an entry in a diary, a memory written 40 years ago by a young woman who had left her brother to a bus stop, shortly after she had brought him to a clothes shop on his way to an exciting new life in Dublin.

This weekend, the woman, now older, will bring the diary to the Sacred Heart Church, Carrickroe, in Co Monaghan.

“It was Saturday, October 11th, 1975”, says Dympna Kerr, sitting in her Liverpool home, as she turns the page in the diary.

“I remember the day well; it stands out in my memory.”

Then she recalls how her long-lost brother, Columba McVeigh, was seized and murdered three weeks later by the IRA.

Last month, McVeigh, had he been allowed to live by the Provisionals, would have celebrated his 60th birthday.

Instead, his dumped body is believed to be still lying somewhere in Bragan Bog, just a few miles from the Sacred Heart Church.

For Kerr, reading through her diary at her home in England brings back sorrowful memories of her brother, one of the four people “disappeared” by the IRA whose remains have still not been found.

McVeigh had just started work in Dublin in October 1975.

His mother, Vera, had wanted to make sure he was well turned out , instructing her daughter to take him to a clothes shop in Dungannon, Co Tyrone.

“We got a bus to Dungannon,” she recalls. “We bought him new trousers, a shirt and tie, jumper and shoes.

“They were wrapped up in a bag. I left him outside Wellworth’s in the Market Square, where he got the bus to Dublin”.

Soon, the bus pulled away from the square, taking her brother into the mists of memory.

Three weeks later, he was seized by the IRA in Dublin on Halloween night. Within days, he was dead, shot in a lonely bog.

Nearly 25 years later, soon after the signing of the Belfast Agreement, the IRA admitted killing the teenager, whose image – cheerfully photographed with a top hat – was published frequently, before it, too, began to recede into the shadows of time.

Since then, the bodies of 12 of the disappeared have been retrieved from a slew of bogs, forests and beaches, with images of JCBs delicately taking away the topsoil becoming a not infrequent sight on TV screens.

McVeigh’s mother campaigned tirelessly to have her son’s remains recovered, but she died eight years ago, aged 82, buried alongside her husband, Patrick, in the graveyard opposite St Patrick’s Chapel in Donaghmore, Co Tyrone.

However, it is the back of the cross that tells the story that has haunted the McVeighs for half a lifetime.

Before she died, Vera McVeigh had prepared for the day when her son’s body would be found, ensuring that the name of her boy, his age – though it is incorrectly given as 17, instead of 19 – and the date of his disappearance were inscribed, ready to welcome him to Donaghmore.

Today, the torch has passed from McVeigh’s mother to his sister Dympna and two brothers, Eugene and Oliver, as they continue attempts to see that their mother’s final wish to be joined by her son are fulfilled.

The task of finding McVeigh’s remains falls to the Independent Commission for the Location of Victims’ Remains (ICLVR), which has searched four times in Bragan Bog, near Emyvale in north Monaghan, since 1999.

Led by forensic expert Geoff Knupfer, investigators located two of the disappeared in a bog at Coghalstown, in Co Meath – Kevin McKee and Séamus Wright, from Belfast – as they searched for another of the missing, Joe Lynskey, a former Cistercian monk from Beechmount in west Belfast.

Last January, Frank Murray, one of the ICLVR’s two commissioners, attended a Mass in Carrickroe, at which the Bishop of Clogher, Liam MacDaid, appealed for information.

Tomorrow, the McVeighs will return to Carrickroe, where the parish priest of Errigal Truagh, Fr Sean Nolan, will make a new appeal.

An ICLVR leaflet will be distributed in Truagh and neighbouring parishes, along with weekly bulletins.

Fr Nolan recalls how a previous search in the graveyard, beside the front boundary wall of the chapel, was unsuccessful, but Oliver McVeigh – Columba’s younger brother – hopes that the 40th anniversary will bring new hope.

“Anything at all might be the crucial bit of information the commission is looking for.”

In the 40 years since McVeigh’s disappearance, the family has gone through “a form of mental torture”, his brother says: “We want to give him a Christian burial with his mother and father, but it’s not happening and it’s very, very frustrating.”

Confidentiality is guaranteed. Its only interest is to find the dead.