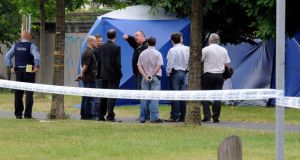 The scene at Grand Canal View, near Davitt Road in Rialto, where a body was discovered this morning beside the Luas line that runs along the Grand Canal. Photograph: Dave Meehan

Gardaí are investigating whether a gangland-style murder of a 27-year-old Dubliner this morning was drug-related.

The man was gunned down in the south-west inner city as he was walking along the edge of a green area at Grand Canal View, Kilmainham, near the Luas line and Grand Canal, at about 10.30am.

A gunman ran up to him on the street shot him once in the chest, fatally wounding him. The gunman then jumped into a waiting car that was driven at speed from the scene.

A firearm was recovered from the car. The car has been removed for technical examination. A Garda Family Liaison officer has been appointed and the family of the deceased are being kept appraised of developments.

The scene of the shooting is near the Luas tram line and at the time of the shotting trams were travelling in both directions. Gardaí are appealing to passengers who may have noticed any anything to contact them.

Gardaí have also been given a description of a person observed close to the scene. He is described as being 177 cm to 182 cm in height (5 foot 10 inches to six foot) wearing a sky blue hoodie with white shoulders. Anyone who saw a person matching this description or who saw the Opel Astra in the area should contact gardaí at Kilmainham on 01 666 9700 or the Garda Confidential Line on 1800 666 111.

The dead man, originally from St Teresa’s Gardens, Dublin 8, but with a recent address at The Maltings in the same area, was known to gardaí. He had convictions for drug-dealing and gardaí believe his murder was drug-related.

The deceased was an associate of some of the criminals involved in a gangland feud for over a decade involving criminals in Crumlin and Drimnagh, though it will not become clear until later whether the killing is feud-related.

“Any form of murder is a serious issue for us,” said Mr Callinan as he met the media on the occasion of a passing-out ceremony for 100 new Garda Reserve members.

“It is very early days yet but I am sure we will get to the bottom of this one.”