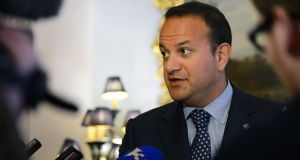 New road safety regulations come into effect today which mean anyone caught texting or “accessing information” on their phones will face a mandatory court appearance and a fine of up to €1,000 for a first offence.

Drivers caught texting and using mobiles or smartphones, even if they are on a hands-free kit, will be given a mandatory court summons and a fine instead of just penalty points under new road safety rules.

The fine will rise to a maximum of €2,000 for a second offence, and a possible three-month jail sentence, along with a €2,000 fine, for three offences or more within a 12-month period.

A spokesman for Minister for Transport Leo Varadkar said that texting while driving is considered a serious enough offence to warrant a mandatory court appearance, which would rank it alongside drink- and drug-driving.

There will be no on-the-spot fines or immediate penalty points for anyone caught texting, as there are for some offences on a lesser scale, even though a judge can subsequently apply points as well as fines.

However, penalty points could be applied on the scene by a garda for the parallel offence of using a mobile phone.

Three penalty points are currently added to a driving licence, as well as an on-the-spot fine of as much as €90 for someone caught using a phone.

Department of Transport sources said penalty points are seen as a lesser offence to mandatory court appearances, and it was felt a summons, coupled with a “severe financial penalty” would be a more effective deterrent.

Texting while driving has not been made a specific penalty points offence for that reason.

“There will be no option to take the points,” a department spokesman said. “There is no grace period, you go straight to court.” Mr Varadkar signed a new amendment in mid-April to existing legislation into law, which brings the new measures into effect today.

While it was already illegal to text while driving, the changes will close off a loophole which could allow people to escape fines and penalties if they were operating a phone resting in a cradle or via a hands-free kit.

Conor Faughnan of AA Roadwatch said the move would not be the “last word” in this area since drivers could continually “fiddle on smart devices of all sorts”.