The management of Matt the Millers pub in Kilkenny have said that they reported a bouncer to Gardai after phone footage of a violent incident on New Year’s Eve went viral on social media. Video: Facebook/Joe Maher 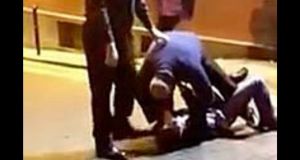 A screengrab taken from a Facebook video which appears to show the alleged assault.

Two doormen have been dismissed and a complaint has been made to gardaí over an alleged assault by security staff outside a Kilkenny pub.

A video of the incident posted on Facebook purports to show the alleged assault by two bouncers on a man outside the Matt the Miller pub in the early hours of New Year’s Day.

The short clip shows a man being held on the ground by one doorman when another walks over and appears to stand on his head.

The build-up to the alleged assault was not recorded on the video which has been seen by 320,000 people.

The incident has been reported to gardaí who are now investigating.

Management at the pub said they were “disgusted and horrified” by the incident and said men were “acting completely outside the remit of their engagement as independent security personnel”.

“We abhor violence of any form and are treating this incident in the most serious manner possible,” the pub said in a statement.

“We have reported this incident directly to the gardaí ourselves, whom we have met and are complying fully with this investigation. We are also in direct contact with the other relevant parties.”

Kevin Maher, owner of Tiger Security Ltd, which employed the security staff working at Matt the Miller that night, said two men had been dismissed from the firm.

He said the incident was “totally out of character” and staff in question were licensed and experienced.

“We take it very seriously and it’s totally unacceptable. We have never had an issue in the past. We have clear record,” Mr Maher said.

It is understood the man pictured on the ground suffered minor injuries.

The incident has prompted significant reaction on social media.