Fitzpatrick, McAteer and Whelan have been charged with allegedly providing unlawful financial assistance 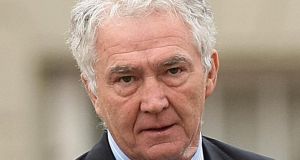 A date has been set for a hearing on disclosure in relation to the upcoming trial of former Anglo Irish Bank executives at Dublin Circuit Criminal Court.

The trial of the bank’s former chairman Sean Fitzpatrick and two former directors, William McAteer and Pat Whelan, was before Judge Martin Nolan last week in order to check on the progress of the case.

At that hearing lawyers for the defence and State indicated that a hearing was necessary to debate issues surrounding the proposed evidence for the trial next January.

Mr Fitzpatrick (65) of Whitshed Road, Greystones, Mr McAteer (62) of Auburn Villas, Rathgar and Mr Whelan (51) of Coast Road, Malahide have been charged with 16 counts of allegedly providing unlawful financial assistance to individuals to buy shares in the bank.

The judge said he did not know what court it would be heard in but said “presumably” in the Criminal Courts of Justice.

Judge Nolan also did not inform lawyers what judge would be dealing with the case.

In last week’s hearing, lawyers for both sides had stressed that it would be beneficial to elect a specific judge to deal with the large volume of material and any preliminary issues leading up to the trial date on January 14th next.

However, Judge Nolan then said it was not the intention of the court to assign a specific trial judge now but rather that the case would be dealt with in the usual manner with other pending trials before the sitting judge in court number five.