Dismissed from Garda for demanding change, Marrinan was reinstated and went on to form representative bodies 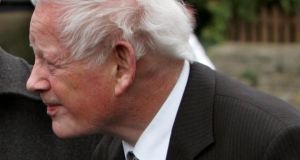 The death has taken place of Jack Marrinan, one of the key figures in the development of the Garda Representative Association (GRA), which represents rank-and-file gardaí.

Mr Marrinan was from Lisdoonvarna, Co Clare. A married father of three, he lived in Rathfarnham, south Dublin, and was aged 81 years. He had been in hospital in recent weeks. He was GRA general secretary for 27 years.

In 1961, he was one of 11 members of the Garda who were dismissed from the force. They were regarded as the leaders of a revolt of gardaí dissatisfied with the terms of a pay deal negotiated by a mixed-rank group of Garda members that was dominated by officers from senior ranks.

Under the terms of the deal, gardaí with fewer than five years’ service did particularly poorly.

Members of the force were forbidden to join a union or organise in any way outside the group appointed to represent them. However, several meetings were held in 1961. The key rally took place on November 4th, when more than 1,000 gardaí met at the Macushla ballroom on Buckingham Street, Dublin. The leaders were later reinstated