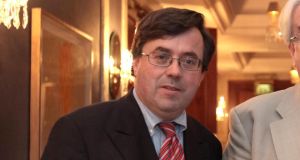 Judge Gerard Hogan heard the men had initially been given sentences in UK of 30 years, which, on appeal, had been reduced to terms of 28 years. Photograph Brenda Fitzsimons

The High Court has found warrants detaining three dissident Republicans, convicted of attempting to buy weapons and explosives on behalf of the Real IRA, are defective.

Mr Justice Gerard Hogan refused to release Fintan O’Farrell, Declan Rafferty and Michael McDonald, and adjourned the case to allow the State to seek to vary the warrants that would keep all three behind bars until late 2016.

The men’s lawyers, who sought an inquiry into their continued detention under article 40 of the Constitution, had argued the warrants keeping the men in prison were defective and that they should be released immediately.

The “dealers” had turned out to be undercover British security agents and, following their arrest, all three were extradited to England where, in 2002, they pleaded guilty at a London court to charges under the UK’s 2000 Terrorism Act and conspiracy to cause explosions in London.

Mr Justice Hogan heard the men had initially been given sentences of 30 years, which, on appeal, had been reduced to terms of 28 years. All three were transferred to Ireland and are held in Midlands Prison in Portlaoise, Co Laois.

The three Co Louth men – O’Farrell and Rafferty, both from Carlingford, and McDonald from Dundalk – had asked the High Court to inquire into the lawfulness of their continued detention in Portlaoise.

He submitted the warrants detaining them in Portlaoise, issued by the Irish court in 2006, were flawed. This was because the warrants recorded they should spend 28 years in prison, when the maximum term in Ireland for similar offences was 20 years.