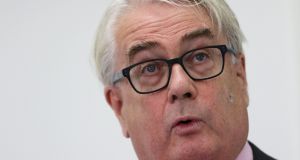 The Chief Justice Mr Justice Frank Clarke said it was ‘surely not too much to ask’ for the legislation to be clear on whether or not is applies retrospectively. Photograph: The Irish Times

The Supreme Court has ruled, by a four to one majority, that a 2014 law aimed at cutting the numbers jailed for unpaid fines has retrospective effect.

The ruling means the new law applies to two men who challenged committal warrants for non-payment of fines imposed before the new law.

The Chief Justice, Mr Justice Frank Clarke, was strongly critical of the failure to address, in the legislation itself, “such a straightforward matter” as whether or not it applies retrospectively. That was “surely not too much to ask”, he said.

A court should not be left to deal such a difficult question of construction with “potential to affect the rights and obligations of many individuals” when it would have been “very simple” for the legislation to have said whether it was intended to apply to such persons.

He made the remarks in a brief observation concurring with the majority view the legislation applies retrospectively. That was the “least bad” interpretation, he said.

The core issue was whether the new fines regime in the Fines (Payment and Recovery) Act 2014 applied to persons such as the two men who were sentenced under the old fines regime, but where default provisions of the orders made against them had not been implemented before the 2014 Act came into force on January 2016.

The 2014 Act was intended to expand the options available for recovery of fines and to reduce the numbers imprisoned over failure to pay a fine imposed following court proceedings.

The separate cases were brought by two men who defaulted on fines arising from convictions imposed on them on separate dates in July 2015.

One defaulted on a €500 fine for a road traffic offence while the second defaulted on fines of €500 for each of four offences under Section 4 of the Criminal Justice (Theft and Fraud Offences) Act 2001.

Arising from the default, and in line with the law then in force, Section 2 of the 1991 Act, the first man was to be jailed for five days and the second for 60 days. Both default periods had elapsed before the 2014 Act commenced in January 2016.

Committal warrants were issued against the first man in March and the second in February 2016.

They successfully challenged the warrants in High Court judicial review proceedings against the DPP, Garda Commissioner and Minister for Justice.

After the Court of Appeal upheld the High Court decision, the Supreme Court heard a further appeal.

Giving the majority judgment, Ms Justice Dunne said the key issue was whether the Act of 2014, especially Section 22, applied prospectively or retrospectively.

She concluded it applies retrospectively and both men are entitled to avail of the procedures provided for under the 2014 Act in circumstances where that Act has significantly altered procedures for collection of fines.

The 2014 Act was commenced before any warrant was sought to be issued by the District Court in respect of the default periods of imprisonment provided for, she said.

Section 22 requires the two men be processed as if they were fined under the 2014 Act, she held.

There was no injustice caused by the retrospective effect of the legislation, she also found.

Dissenting, Ms Justice Mary Finlay Geoghegan said the issue is whether the provisions of the 2014 Act “relate to” the fines imposed on the two men in July 2015 within the meaning of section 22 of the 2014 Act.

No provision of the 2014 Act could, in accordance with its terms, have been considered in February or March 2016 to relate to the fines imposed in July 2015 on either man, or to what steps should be taken in 2016 in relation to such fines, she held.