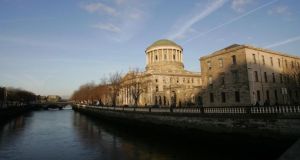 Former Private Victor Murtagh had never been out of employment and brought no claim for loss of earnings. Photograph: Bryan O’Brien

The Supreme Court has halved to some €150,000 a €302,873 damages award made to a former soldier over negligence by the Army over its delay in failing to diagnose and treat him for post-traumatic stress disorder (PTSD) arising from his experiences in Lebanon.

The three judge Supreme Court agreed with the High Court there was failure to properly and more speedily diagnose and treat former Private Victor Murtagh for PTSD sooner than in 1996.

Mr Murtagh (52), a father of six, of Pearse Road, Ballymote, Co Sligo, claimed he did not receive any counselling or treatment from the Army for severe anxiety attacks and stress-related illness sustained from his experiences in Lebanon in 1986/87.

His case was considered a test case concerning the State’s liability over PTSD.

While dismissing the appeal by the Minister for Defence and State against the core findings of negligence, the Supreme Court considered the €300,000 sum for general damages was excessive and reduced it to some €150,000.

Giving the Supreme Court judgment on Monday, Mr Justice Michael Peart said there was medical evidence Mr Murtagh had shown considerable improvement by 2004, several years before the 2007 High Court hearing. He had never been out of employment and brought no claim for loss of earnings so it was unclear there was a proper basis for an award for “loss of vocation or loss of employability”.

In his 2008 judgment on the 28 day hearing, the High Court’s Mr Justice Declan Budd found Mr Murtagh was “obviously stricken” with PTSD while in Lebanon in 1986/87.

He found that culpable negligence by senior army staff in failing, despite his “strange and abnormal behaviour”, to refer him for diagnosis and treatment led to his contracting chronic PTSD.

Mr Murtagh was described as a “broken man” when he returned from his first and only tour of duty there at the age of 21. He was in Lebanon at a “tough” time when there was an atmosphere of huge hostility with UNIFIL troops coming under regular fire, the court was told.

On December 6th 1986, a fellow soldier, Pte William O’Brien was killed, while on January 10 1987, another colleague, Cpl Dermot McLaughlin, was shot dead by Israeli forces.

Mr Murtagh reacted badly to both deaths, the court heard.

He was discharged from the Army in 1998 on health grounds after 14 years service. He also got €2,650 damages for hearing loss as part of the overall award.

The Minister denied the claims relating to post-traumatic stress but did not dispute the hearing loss claims.

Mr Justice Budd found the Minister, as an employer, was under a duty of care for the safety of his employees and must keep abreast of contemporary knowledge in relation to reducing “potential afflictions” soldiers are likely to be exposed to.

The “perils” of PTSD had been well known for many years prior to 1986, he said.

While Mr Murtagh was not entitled to compensation because of his work in Lebanon, he was sent for treatment to a medical centre there on three occasion and “warning bells” should have rung about his condition “as an immature 21 year old suffering acute anxiety states to the extent of loss of consciousness and uncontrollable shaking fits”.

He rejected claims Mr Murtagh was alcohol dependent in Lebanon and found failure to diagnose and treat him allowed the PTSD to become chronic.

His“strange and abnormal behaviour” had been well known to senior officers and the failure to treat those symptoms or to refer him for checking out was due to the “culpable negligence on the part of his superiors and resulted in his contracting chronic PTSD”, he held.

Mr Justice Peart upheld the core findings in relation to negligence by the defence concerning the diagnosis and treatment of PTSD.

He rejected arguments by the defence they were prejudiced arising from the trial judge’s conduct of the case.

While the “constant and relentless” interventions ought not to have happened as they did, they were not ill-tempered or discourteous and the most that could be said was they were “unnecessary and irritating”. He did not consider justice was denied to the defence by the trial judge’s conduct, believed a fair, “though needlessly long”, trial was achieved and there was a proper judicial determination of the main issues.

He also rejected the defence arguments the trial judge should have recused himself after the plaintiff’s opening of the case.

There was no basis for the State’s concerns about pre-judgment of the issues or objective bias, arising from various comments made by the trial judge during the opening, he ruled.

Judge hopes ruling on treatment of boy may also help determine law for others 16:53
Judge overturns refusal of permission for 81-bed hotel in Co Galway 16:29
Twitter must do more than ‘reasonable search’ for disclosure order – court 16:18
Woman killed in three-car collision in Roscommon 16:07
New campaign to combat fake news targeted at young people in Ireland 16:05