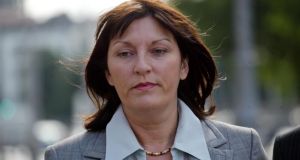 The award for libel made to communications consultant Monica Leech has been cut by the Supreme Court to €1.25 million from €1.87 million.

She was awarded the €1.87 million in 2009 by a High Court jury over a series of articles in 2004 in the Evening Herald, published by Independent Newspapers.

Yesterday, a three-judge Supreme Court said it regarded the libel as serious and was substituting the jury’s award with €1.25 million.

The court also allowed an appeal by Ms Leech against the dismissal of another High Court action over an article in the Irish Independent in December 2004 about an RTÉ radio broadcast related to Ms Leech.

In their appeal against the €1.87 million award, lawyers for Independent Newspapers argued the June 2009 award by the High Court jury was so disproportionately high that it should be set aside. The “chilling effect” on freedom of the press had to be taken into account in assessing such awards, it was argued.

Ms Leech’s lawyers said the award should stand given the serious nature of the defamation. The Supreme Court heard the appeal earlier this year.

The case arose out of a series of articles in November/December 2004 in the Herald. Ms Leech claimed they implied she was having an extra-marital affair with then environment minister Martin Cullen which was strongly denied.

In the High Court, the jury found the words complained of did suggest she had been having an affair and awarded her what was the highest ever libel award at that time.

The case was appealed by Independent Newspapers which had to pay €750,000 plus €100,000 costs to Ms Leech pending determination of the appeal.

In two separate judgments yesterday in relation to the €1.87 million award, Ms Justice Elizabeth Dunne, who Mr Justice John Murray agreed with, said it was appropriate to substitute the figure with €1.25 million. Mr Justice William McKechnie said the awarded should be cut to €1 million. Both judgments said it was a serious libel which had severe consequences for Ms Leech.

Ms Justice Dunne said the defamation was far-reaching in that it attacked both the personal and profession life of Ms Leech.

The implication of the articles was that, as a married woman with two children, she was unfaithful to her husband and had a part to play in the break-up of Mr Cullen’s marriage.

They also conveyed the impression Ms Leech was prepared to engage in an adulterous relationship in order to advance her career along with a question mark as to her capability for the tasks she was engaged for, the judge said.

The communications business she set up in 2004 never got off the ground because of the articles and her government public relations contract was not renewed, she said.

One of her sons had to change school that year, when he was doing his Leaving Cert, because of the stories. She also described being personally abused in Waterford as a result of the articles, the judge noted.

While the defamation here was “certainly towards the higher end of the scale” and involved “a sustained campaign” against her, the judge was satisfied the jury’s award was excessive and must be set aside.

If the Supreme Court found the award excessive, she said, the case should go back before a new High Court jury.

The judge said she was satisfied it would be desirable for all parties to have an end to the litigation and the approach of the court should be to set the award aside and substitute it with a sum of €1.25 million.

Mr Justice McKechnie said, given it was 10 years since the articles, the appropriate approach was for the court to put itself in the position of the jury. He considered the appropriate award was €1 million.

In separate judgments in relation to the Independent’s article over the defamatory remarks about Ms Leech made by a caller to RTÉ’s Liveline, Ms Justice Dunne said the main ground of appeal centred on the fact the jury in this case, before giving their verdict at the end of the High Court hearing, returned to court wearing their coats having been called back by the trial judge for further re-charge.

The foreman of the jury announced they had made a decision and after the judge re-charged them to go back briefly and then come back with a decision.

This, coupled with the fact the jury returned with their verdict within minutes of re-charge, led Ms Justice Dunne to the conclusion a reasonable and fair-minded observer would believe they had made their decision on the basis of an erroneous charge.

So Ms Justice Dunne and Mr Justice McKechnie, who Mr Justice Murray agreed with, ruled the verdict was unsafe.