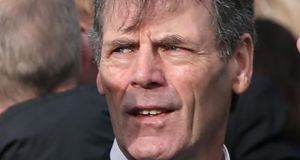 The judge observed that the plan to perform the murder of Patrick “Patsy” Hutch (above) was postponed due to the arrival of Storm Emma. File photograph: Collins Dublin

A senior Kinahan cartel member and an accomplice have received sentences totalling 17½ years at the Special Criminal Court for orchestrating the gang’s plan to kill a member of the Hutch family in Dublin’s north inner city.

Patrick Curtis (38) of Bellman’s Walk, Seville Place, Dublin 1 was jailed for 10 years while his co-accused Mohammed Smew (27) of Milner’s Square, Shanowen Road, Santry, Dublin 9 was sentenced to seven-and-a-half years in prison for their role in the plot to murder Patrick “Patsy” Hutch.

Patrick Curtis and Smew are the last two men to be sentenced for their involvement in the plan to kill Mr Hutch.

Patrick Curtis previously admitted directing the activities of a criminal organisation within the State between February 1 and March 10, 2018. Smew had pleaded guilty to participating in the activities of a criminal organisation, to wit the murder of Mr Hutch, by providing, moving and repairing vehicles, and of the planning or assisting to plan an attempted shooting between February 1, 2018, and March 3, 2018.

Presiding judge Mr Justice Tony Hunt, sitting with Judge Sarah Berkeley and Judge Dermot Dempsey, said the court accepted the uncontradicted evidence of the nature of the Kinahan crime group, which was organised on a hierarchical basis with a subcell structure. A specific subcell had been formed in this case for the motive of murdering Mr Hutch, he said.

Patrick Curtis had supervised and directed the subcell and was the highest figure within its hierarchy, the judge said, adding however that Patrick Curtis was not the author of the instructions, which he had received and passed on from his superiors.

Mr Justice Hunt said there was no doubt that Patrick Curtis knew that he was directing the subcell on behalf of the Kinahan organised crime group, which he called “an insidious organisation”, in the preparation for the murder of Mr Hutch.

He said Patrick Curtis was the “top figure within” the sub-cell of the Kinahan organised crime group and was therefore regarded as a “repository of trust and confidence” by his superiors, even if his lack of competence betrayed his trust.

The judge noted that Patrick Curtis had some difficulty in dealing with the detailed nature of the instructions for murder that he received, which caused him to compromise the security of the encrypted phone issued to him by the Kinahan cartel by taking screen shots of his instructions on his unencrypted phone.

Referring to Mohammed Smew, Mr Justice Hunt said that the “startling feature” of this case was the “relative stability and prosperity of his childhood years” when compared to the “dysfunctional and chaotic upbringings of many who become involved in such matters”. The non-jury court has heard that both of Smew’s parents are doctors and he had embarked on a law degree at Griffith College.

A doctor told Patrick Curtis’ sentence hearing last month that jailing the claustrophobic senior Kinahan cartel member was like putting “a man with arachnophobia in a cell with spiders”. Dr Conor McGarry, a GP attached to Portlaoise Prison, said that Patrick Curtis was diagnosed with excessive compulsive disorder and had historic issues which have impacted on his ability to cope with prison in Ireland. He said the defendant got locked in a car at the age of seven, broke his fingernails attempting to get out of the vehicle and had suffered from a fear of being alone since.

The sentence hearing was told that Patrick Curtis suffers from irrational behaviour and blesses himself around sixty times a day to compensate for negative thoughts. He shares a cell in the A block of Portlaoise Prison with his brother Stephen as his anxiety levels are so bad and it has never previously happened that two prisoners have shared the same cell, said Dr McGarry.

Mr Justice Hunt said on Monday that Patrick Curtis’ barrister Michael O’Higgins SC had submitted that the court should apply a further reduction on the basis of his client having a condition that would make the serving of a lengthy sentence significantly more difficult. “In this first instance, it is tempting to observe that not plotting to murder other people would have been the best way of avoiding this unfortunate situation,” remarked the judge.

The judge said the headline sentence for Curtis was 16 years imprisonment and the weightiest mitigation factor was his guilty plea, which deserved a straight 25 per cent discount. Mr Justice Hunt indicated that if Curtis genuinely found prison so unattractive, then he should have no difficulty keeping his side of the “social contract involved in his acceptance of a conditionally suspended portion of his sentence”. The judge said he would suspend the last two years of the 12-year adjusted sentence on condition that the accused enter a bond in the sum of €100 to keep the peace and be of good behaviour during his time in custody, during any period of temporary release, and for a period of six years following his date of final release from his sentence.

The non-jury court imposed a final sentence of 12 years imprisonment with the last two years suspended on Curtis.

Passing sentence on Smew, Mr Justice Hunt observed that the evidence unequivocally established that he assisted in the preparations for the “very grave crime of murder” and was initially prepared to serve on the “front line of the killing”. “There is no doubt that Smew’s conduct was of considerable assistance in the Kinahan organised crime group over the time in which his participation lasted,” he noted.

He observed that the plan to perform the murder was postponed due to the arrival of Storm Emma and Smew was arrested and remanded in custody in relation to a separate matter after the arrival of the storm.

The judge set a headline sentence of 11 years imprisonment and said the court found the weightiest mitigating factor was his guilty plea, which deserved a 25 per cent discount. Smew was sentenced to eight years and three months in prison with the final nine months suspended.

The men’s sentences were backdated to December 2019, when they were first arrested.

In June, Mr Justice Hunt imposed sentences totalling 19 years on three men who also took part in the Kinahan Cartel plot to kill Mr Hutch. Michael Burns (43) was jailed for nine years whilst Stephen Curtis (32), the younger brother of Patrick Curtis, and Ciaran O’Driscoll (25) were both sentenced to five years each in prison for their role in the plot to murder Mr Hutch.

Last May, Kinahan Cartel foot soldier Mark Capper (31), who “poured cold water on” and withdrew from a plan to murder Mr Hutch three days before the proposed killing was also jailed by the Special Criminal Court for seven-and-a-half years. Capper had admitted helping the organised crime group in a plan to kill Mr Hutch by providing and repairing vehicles for the criminal organisation and carrying out reconnaissance.

In July 2019, a three-man “hit for hire team” received sentences totalling 36.5 years at the Special Criminal Court for planning to kill Mr Hutch before they were intercepted by gardaí just 250 metres from their target’s home in Dublin’s north inner city. Gary Thompson (35) and his brother Glen Thompson (25) were each jailed for 12 years and six months. A third man, Afghan war veteran Robert Browne (36) was sentenced to 11 years and six months in prison.