Representative for Michael Lynn claimed State was trying to ‘nail’ him 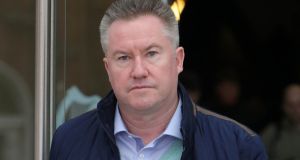 Letters sent to the Director of Public Prosecutions on behalf of struck-off solicitor Michael Lynn claimed the State was trying to “nail” an “innocent man” with “robust bloodlust”, the Court of Appeal has heard.

Mr Lynn (50) of Carlton Square, Maynooth, Co Kildare, is due to stand trial at Dublin Circuit Criminal Court next year on 21 counts of stealing almost €30 million from seven financial institutions.

He left Ireland in 2007 but was extradited from Brazil last year, after spending 4½ years on remand at the Cotel prison, in northwestern Brazil, as he fought his extradition back to Ireland.

Ahead of his extradition, Brazilian authorities sought assurances from Ireland that any time Mr Lynn spent in prison awaiting extradition would be deducted from any potential prison sentence here, and that he would not serve more than 30 years in prison here, if found guilty. The assurances were required as part of the Brazilian extradition process.

His lawyers challenged those assurances in the Irish High Court, arguing that they could not have been given. But the High Court rejected their arguments, and the case came before the Court of Appeal on Tuesday where judgment was reserved.

Counsel for Mr Lynn, Padraig Dwyer SC, told the three-judge court that a favourable outcome of the appeal might strengthen Mr Lynn’s attempts to prohibit his upcoming trial at Dublin Circuit Criminal Court.

He said his client’s “beef” was with assertions made by the DPP, to the Brazilian authorities, that the 4½ years Mr Lynn spent in Brazilian jail would be taken into account by the Irish courts, if found guilty.

Mr Dwyer said the DPP’s assertions could be construed as impinging on the separation of powers as it appeared to be a guarantee of what an Irish sentencing court would do. He submitted that the DPP were giving assurances on the basis of what is expected to happen, rather than what the law is.

He further submitted that Mr Lynn could, “in theory”, receive “21 consecutive sentences” if found guilty, leaving him with a sentence in the 30 year range. Although, Mr Dwyer accepted that sentences for fraud in Ireland “don’t attract sentences of that type of range”.

While Mr Lynn was “languishing” in Brazilian jail, Mr Dwyer said multiple letters were sent on his behalf to the DPP asking how these assertions could be made.

President of the Court of Appeal Mr Justice George Birmingham said some of the letters, from a former solicitor of Mr Lynn, were “intemperate in the extreme… to put it mildly”.

In one of the letters, the court heard, a former solicitor of Mr Lynn told the DPP that his client was an “innocent man” and the State were trying to “nail Mr Lynn” with “robust bloodlust”.

It wasn’t the sort of language one finds in correspondence from an officer of the court, Mr Justice Birmingham said.

Counsel for the Director of Public Prosecutions, Seán Gillane SC, submitted that Mr Lynn’s case was “moot” or pointless.

If it wasn’t “moot”, it was “unstateable”, “misconceived” and “contrived”, Mr Gillane said.

He said the “ground keeps shifting” and there were “curious” features to the way proceedings were being handled. He said all of the complaints being made were arguments for the Brazilian courts.

He said it was “crystal clear” that in Ireland, sentencing courts take account of time already served in prison and it was “utterly unreal” to suggest Mr Lynn could serve more than 30 years in prison, if found guilty.

Mr Dwyer indicated that an application would be made for free legal aid.

1 DUP pleads with UK to reduce salary threshold for migrant workers coming to North
2 ‘If all the immigrants go back, who will work in the meat factories and do the crap jobs?’
3 Jewish council dismayed at Sinn Féin TD’s ‘unacceptable’ tweets
4 A Russian cruiser with ‘cannibal rats’: What other ‘ghost ships’ could be out there?
5 Person claiming to represent ‘ghost ship’ owner comes forward
Real news has value SUBSCRIBE