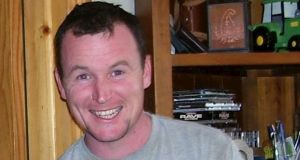 Peter Butterly (pictured) was ‘an excellent, loving and proud father to our three children and their lives without him to protect and nurture them have been horrific to say the least,’ his widow told the court

The leader of the so called New IRA in Dublin has been jailed for life for the murder of another dissident republican almost six years ago.

Mr Butterly, was chased and shot dead outside The Huntsman Inn, Gormanston, Co Meath in view of students waiting for their school bus on the afternoon of March 6th, 2013 in what the three-judge court said was not “a spontaneous act”. The father-of-three died from gun shots wounds to his neck and upper back.

Braney had pleaded not guilty to murdering Mr Butterly.

Delivering judgment last Monday at the non-jury court following an 11-week trial which ended in December, Mr Justice Paul Coffey, presiding, said the court was driven “irresistibly” to the conclusion that Braney was involved in the organisation and planning of Mr Butterly’s murder beyond a reasonable doubt.

In his opening address on October 4th last, prosecuting counsel Paul O’Higgins SC told the court Braney “is said in effect to have been the man who gave the orders...and is shown to have had an extensive involvement”.

In 2018, Braney was sentenced to four years and six months after he was found guilty of IRA membership by the Special Criminal Court. He had threatened an accident victim that he was in the IRA and would shoot him if he did not withdraw a claim against a former employer.

An impact statement was read to the non-jury court by the victim’s wife, Eithne Butterly, during Braney’s sentence hearing.

“As we come close to Peter’s sixth anniversary here I am before the courts with yet another victim statement.

“Kevin Braney, you have no concept, nor do you really care how we feel but I am going to tell you regardless. Peter was an excellent, loving and proud father to our three children and their lives without him to protect and nurture them have been horrific to say the least.”

“Our two daughters were his princesses and he absolutely adored the two of them. He participated in so many ways in their childhood and their love of sports was an enormous bond between them. Peter attended and supported the girls in so many of their activities and was always the proudest daddy of their many achievements,” she said.

Mrs Butterly said her son was only six when she had to tell him that his father was dead and that he was never coming home. “His scream is a scream that I will never forget and still haunts me to this day. He was only a baby.”

The widow said her son has “very few memories of his daddy, thanks to you, but a few are still vivid and poignant to him. He remembers Peter giving him ‘the forklift’ to bed every night and the two of them going through the Find Stig book.”

Addressing Braney, she said that he had denied her husband participating in his many sporting activities and her son gets “so angry about this”. “Can you blame him?” she added.

“Peter was a loving and devoted husband as well as my best friend and our lives without him are literally a living nightmare. And thankfully we have so many wonderful memories that you can never take from us,” she concluded.

Mr Justice Coffey, presiding, sitting with Judge Martin Nolan and Judge James Faughnan, then sentenced Braney to the mandatory term of life imprisonment, backdated to when he first went into custody for this matter on September 14th, 2017.

Ms Cummings asked the court that a “nolle prosequi” be entered on the outstanding count of membership. This means the State will not be proceeding with the prosecution in relation to this count.

Following sentencing Braney gave little reaction before he was led away by prison officers.

Giving the court’s verdict last Monday, Mr Justice Paul Coffey said the prosecution’s case was that Braney was part of a common design to procure the murder of Mr Butterly.

Convicting Braney, the judge said the circumstantial evidence connected the defendant with Mr Butterly’s killers Dean Evans and Edward McGrath as well as with The Huntsman Inn.

The court considered it “highly significant” that Braney drove to The Huntsman Inn following a meeting at David Cullen’s flat in Balbriggan on the night prior to the shooting.

The judge added that the circumstantial evidence also connected the defendant with a meeting that took place the day after the murder. There was also evidence that Braney met Mr Butterly’s murderers two days before the killing.

The court was also satisfied, Mr Justice Coffey said, that Braney was at a meeting at KFC restaurant at Charlestown Shopping Centre in Finglas on March 7th where “audible utterances” suggested that the six men present were concerned as to why the Huntsman Inn had been saturated with gardaí the previous day and why every move they made was followed. This meeting was “so proximate” in time that the court could not dismiss it as unconnected, he said.

In its judgement, the court found that former murder accused-turned State’s witness David Cullen underwent a “withering” cross-examination by the defence and Cullen accepted that dishonesty did not bother him. “He agreed he would perjure himself to avoid being convicted of murder,” said the judge.

The trial heard evidence from Cullen, who described his role in the shooting of Mr Butterly. Cullen was originally charged with Mr Butterly’s murder but he subsequently pleaded guilty to the unlawful possession of a semi-automatic pistol at the Huntsman Inn on the day of the shooting.

His plea was accepted by the DPP, he turned State’s witness over a year after the shooting and this murder charge was dropped.

During the trial, the protected witness testified that Braney came to his Balbriggan apartment with other men on March 5th, the evening before the shooting.

Cullen gave evidence that men arrived to his flat on the evening with a black sports bag but he did not remember who carried it into his apartment. The men were talking amongst themselves about what was going to happen the next day. Cullen said he remembered Braney saying: “Make sure this is done right and he [Butterly] doesn’t get away.”

Mr Justice Coffey said the court accepted Cullen’s evidence that his role in the shooting had been to dispose of a gun in the grounds of Gormanston College and that there was a meeting of conspirators in his flat on the night before the murder.

The judge said Braney was at this meeting and whilst there he discussed how the shooting was to be carried out the following day. Cullen’s evidence that Braney was at his flat is corroborated by the considerable body of circumstantial evidence in the case, he added.

The judge said that the court had given careful consideration to an argument put forward by the defence that Braney was not in Cullen’s flat that night. “Such is the force of the circumstantial evidence against the accused that we cannot accept this is reasonably possible,” outlined the judge.

In conclusion, Mr Justice Coffey said the court found that Braney had been involved and participated in Mr Butterly’s murder.

Paul O’Higgins SC, prosecuting, opened the trial on October 4th last year, telling the judges that it was an unusual case because gardai were already keeping an eye on movements in the area that day as a result of certain suspicions. He said that Mr Butterly had driven into the carpark of the Huntsman Inn around 1.55pm. He had parked and remained in his car.

He said that a black Peugeot 206 then drove into the carpark and parked for a few minutes. It left shortly after 2pm and was followed by an unmarked garda car.

It was around this time that a stolen Toyota Corolla was driven into the car park, he said.

“The car (Toyota) then stops in front of Mr Butterly’s car and two shots are fired, one through the windscreen and one through the bonnet,” said Mr O’Higgins. “Mr Butterly, who’s on his own in the car, runs..., but he doesn’t get very far.”

Mr O’Higgins explained that two witnesses, who were waiting for their school buses, had stated that he was chased across the carpark and shot three times as he ran. The court heard that he fell and died almost immediately.