Mother of boy (14) who died queries Prozac use 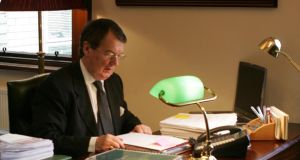 The mother of a 14-year-old boy who took his own life told his inquest she would never have agreed to him taking Prozac if she had known the side effects.

Jake was diagnosed with Asperger Syndrome in early 2012 and suffered anxiety. He had been seeing a psychologist at Clondalkin Linn Dara Child and Adolescent Mental Health Services and was referred to a psychiatrist in January 2013, as his anxiety was increasing due to his upcoming Junior Cert.

When they collected the prescription, no patient information leaflet was included. She said in the US Prozac carries a “black label” warning that it should be given to under-18s with anxiety problems only after all other avenues are exhausted.

“My child is dead. I was not told this could happen.

“My husband and I were not given any literature . . . if we were, there is no mother in her right mind going to let their child have a drug that can cause suicide and self-harm when they are suffering from those symptoms. Asperger’s is . . . a condition that no tablet or medication is going to fix,” she said.

Dr Migone said the US black label was based on a meta-analysis carried out in 2003 but later studies found no increase in suicidal ideation in young people with anxiety taking Prozac.

In 2003 the Irish Medicines Board recommended Prozac as being the safest drug of its type for children under 18, she told the court.

Jake was with his father John Lynch when Dr Migone prescribed the Prozac. She said she would have discussed some side effects and said Ms McGill-Lynch should feel free to call her having read the patient information leaflet that would come with the Prozac.

Ms McGill-Lynch said only Mr Lynch had signed the consent form. Dr Migone said that it was her understanding that Ms McGill-Lynch was in favour of the medication.

The court heard that Jake was in an online relationship with an American girl and they had broken up a few days before he died.

Dr Migone said relationship breakdown was a “stressor” in adolescents.

On the night he died, Jake’s parents discovered he had injured himself when Mr Lynch called him for supper. Mr Lynch started CPR. Jake was taken to Tallaght Hospital but died later that night.

The inquest was adjourned to July 14th for more evidence.