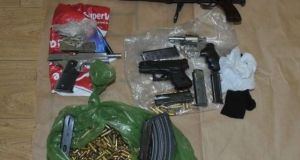 Gardaí went into a unit in a business park in Rathcoole, Co Dublin and found an arsenal of firearms and ammunition, the Special Criminal Court was told.

Two Dublin men found last year with an arsenal of weapons including four loaded guns and more than 1,000 rounds of ammunition have been jailed for their role in what a judge described as a “deadly enterprise”.

The men were found with the cache on January 24th last year at a unit in Greenogue Business Park, Rathcoole, Co Dublin.

Sentencing the men on Tuesday, Mr Justice Tony Hunt, presiding at the three-judge court, observed that if the men had not pleaded guilty they would have both been jailed for the headline sentence of twelve years.

The court had previously heard that on the morning of January 24th, 2017, Harding and another man were observed by gardaí driving a Ford transit van to Greenogue Business Park.

A Passat, to which Walsh had access, was also parked outside.

Harding and the other man were later seen leaving the unit in the same van before stopping at a Texaco service station, where gardaí, acting on information of an “urgent and pressing” nature, approached the van and arrested the men.

Meanwhile, in the business park, other officers went into the unit and found an arsenal of firearms and ammunition.

The unit had been purporting to be the premises of a logistics company, giving the impression it was a legitimate freight business based in the UK.

‘Ready to be used’

In the upstairs loft area, a number of loaded firearms were laid out on cardboard on the floor.

There were four loaded revolvers, “ready to be used”, and an AK47 assault weapon.

Mr Justice Hunt said that the weapons represented “enormous potential for death and destruction” and that it was a “lethal arsenal stored for the purpose of organised and very serious crime”.

The judge said that neither man could be categorised as organisers in “this deadly enterprise” but that organised crime “depends in a significant way on the activities” of the two defendants.

He referred to organised crime as a “cancerous growth on our society”.

Mitigating factors for the men were their early guilty pleas.

Referring to Walsh, who has a number of previous convictions for public order offences, the judge noted the “reasonable possibility there might have been some kind of threat or coercion behind his actions”.

He was sentenced to nine years in prison with one year suspended.

Gardaí suspect botched murder attempt was bid to avenge Mulready-Woods death 11:56
Election 2020: ‘We all think the health service is a lost cause’ 11:55
Churches urge faithful to exert pressure on politicians over housing 11:53
GRA says lack of resources will leave gardaí ‘without armed backup’ 11:49
Clothing and footwear seized in Cameron Blair murder inquiry 11:08