Man who ‘fell’ against Monet painting later had heart surgery 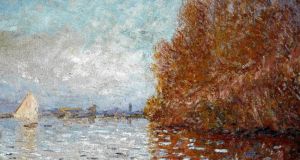 The Claude Monet work, Argenteuil Basin with a Single Sailboat, is valued at €10 million

A man who claims he collapsed into a Claude Monet painting had a quadruple heart bypass a year later, his trial has heard. The work, Argenteuil Basin with a Single Sailboat, is valued at €10 million

He told witnesses he “felt weak” and “fell against” the oil painting, explaining to paramedics that he suffered from unstable angina.

Consultant surgeon Nicholas Walcot told Brendan Grehan SC, defending, that he supervised coronary surgery on Mr Shannon on July 15th, 2013, when he had 90 per cent blockages in all three major vessels of the heart, which would have built up over the years.

Asked for his expert opinion on the event in the gallery, Mr Walcot said Mr Shannon getting up and walking away was “a little bit inconsistent”.

“If somebody collapses, I would have thought the person would stay down or sit down quickly.”

Covid-19: People should keep record of who they meet to help contact tracers 20:07
Wild salmon in two rivers reported to have symptoms of red skin disease 19:48
Galway shuts down popular tourist spots and beaches over Covid-19 concerns 18:49
Taoiseach has confirmed schools will reopen at the end of August 18:38
Private hospitals ‘takeover’ by State will not be extended past June 18:32