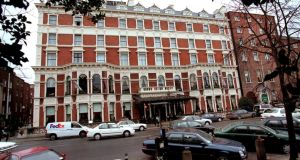 A man awaiting trial for allegedly putting his fist through a €10 million Claude Monet painting in the National Gallery in Dublin has been remanded in custody on fresh charges of damaging two valuable paintings in the Shelbourne Hotel last month.

Bail was refused to Andrew Shannon (48), with an address in Willans Way, Ongar, Dublin 15, in the District Court, with Judge John Coughlan saying he felt it was a “very serious case”.

The court heard Garda concerns that he posed a “serious threat to public displays of art” should he be released.

Shannon’s nephew Jamie Shannon (19), with an address at Empress Place, Dublin 1, was also charged with criminal damage relating to the alleged incident at the Shelbourne Hotel in which two paintings valued at €14,000 each were damaged beyond repair.

He was granted bail but on condition he did not associate with his uncle, that he adhere to a curfew and that he stay away from all museums, galleries and stately homes. His case was adjourned to March 14th.

During a bail hearing in relation to Andrew Shannon, Det Garda Eugene McCarthy told the court the allegations were very serious and that the accused could face up to 10 years in prison on conviction.

He said an independent expert appraisal of the art works in the hotel’s Adams Suite found that they were beyond repair.

In his evidence, Det Garda McCarthy said Mr Shannon and another man were caught on CCTV entering the Shelbourne on January 8th last.

He said at 5pm the two canvases had been in perfect condition, but were badly damaged by 7pm. The two males in question were the only ones seen entering the suite that afternoon, the court heard.

The objection to bail took into account Mr Shannon’s pending Circuit Court trial for allegedly putting his fist through a Monet painting, valued at €10 million, in the National Gallery in June 2012.

He is also awaiting trial for allegedly handling stolen goods, in relation to 57 antique books taken from Carton House in November, 2006.

Det Garda McCarthy said he was concerned the accused would not show up for his trial and added: “I believe he poses a serious threat to public displays of art in this country.”

Helen O’Hanlon BL, defending, noted her client had not been convicted of the alleged offences, that he had not been apprehended at the scene and that there was no eye-witnesses to the damage being caused to the art works in the Shelbourne.

She inquired as to whether bail could be granted with strict conditions attached.

However, Judge Coughlan denied the application on the ground that the alleged offences were serious and due to the strength of evidence presented.

“This is a very serious case,” he said and remanded the accused to appear at Cloverhill District Court next Friday.

The accused, who was dressed in a beige overcoat and red striped shirt, did not address the court.