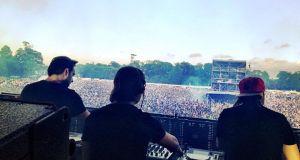 A picture from the Swedish House Mafia concert in the Phoenix Park in Dublin on July 7th, 2012. Photograph: Steve Angello/Instagram.

A young man who smashed a glass bottle over a concert-goer at a Swedish House Mafia gig has been sentenced to five years in prison with the final two years suspended.

Karl Higgins (20) of Shancastle Lawns, Clondalkin pleaded guilty at Dublin Circuit Criminal Court to violent disorder on the July 7th, 2012 in the Phoenix Park in Dublin.

Garda Shane McCartan told Derek Cooney BL, prosecuting, that he had been on undercover duty at the concert mingling with the crowd when he witnessed the unprovoked attack. Shortly after 9pm, a scuffle broke out between eight men and four women before another concert-goer, Andrew England, tried to intervene as a peace-maker.

Mr England had come to Ireland from the Isle of Man to visit family and had tickets to see Swedish House Mafia with his girlfriend. Gda McCartan said he saw Higgins attacking Mr England from behind by smashing a glass bottle over his head and then jabbing the jagged neck of the bottle into his elbow.

Gda McCartan said Mr England’s initial reaction was to avoid confrontation and try to walk away before he was attacked “in a ferocious manner”.

A co-accused, Raymond Donnan, repeatedly stabbed Mr England in the back with a kitchen knife, before the victim was pulled to safety out from the crowd and into the disabled viewing area.

Donnan (23) of Greenfort Crescent, Clondalkin has pleaded guilty to assault causing harm and will be sentenced at a later date.

Medical reports and a victim impact statement by Mr England stated he suffers regular sleepless nights from the anxiety caused by the attack. He had to take several sick days, having not had one in five years prior to the attack. He has lost a stone in weight and keeps getting infections which he attributes to stress.

Judge Martin Nolan said Mr England seemed to be a “rather chivalrous man” and had tried to separate a fight, for which he was savagely attacked by Higgins and Donnan. He sentenced Higgins to five years in jail with the final two years suspended, on condition that he place himself under the supervision of the Probation and Welfare Services for 18 months on his release. Judge Nolan said it was a serious crime and that he would have handed down a longer sentence but for Higgins’ youth.