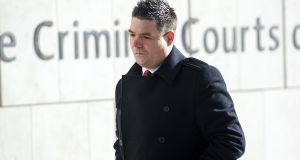 A former property investor who stole deposits from would-be tenants, including a woman and her daughter (8) who were left homeless as a result of his fraud, has dropped an appeal against the severity of his sentence.

Jonathan Chubb (38), of Keeper Road, Drimnagh, Dublin, pleaded guilty to 34 counts of theft and one count of money laundering between March 2013 and July 2015. He also pleaded guilty to providing a false reference, deception and possession of a forged driving licence.

Dublin Circuit Criminal Court heard that Chubb stole deposits from 11 people who believed he was the landlord of an apartment for rent at Oblate View on Tyrconnell Road in Dublin.

Garda Nathan McKenna told prosecuting lawyers that people arrived at the address expecting to move into the property but found “maybe 15 people who had turned up to do the same thing”.

He netted almost €50,000 from the series of thefts and fraudulent schemes and was sentenced to 7½ years imprisonment with the final 18 months suspended by Judge Karen O’Connor on June 1st, 2018.

Judge O’Connor said Chubb’s offending was extremely premeditated in nature and involved multiple victims over a long period of time.

She said it was particularly disturbing that he was aware that one woman he took a rental deposit from was living in a woman’s refuge, yet he stole her money anyway, after having spoken to her social worker.

Chubb was due to appeal the severity of his sentence on Tuesday. However, before the case came on for hearing, President of the Court of Appeal Mr Justice George Birmingham told Chubb’s lawyers that their client should be made aware of the court’s full range of powers, namely, the power to increase sentences as well as reduce them.

Mr Justice Birmingham said the case appeared to be “singular” because of the “very vulnerable” nature of the victims in a “housing emergency”.

Mr Justice Birmingham, who sat with Mr Justice Patrick McCarthy and Ms Justice Isobel Kennedy, said Chubb had been “very well advised”. He has 27 previous convictions including 12 for theft and fraud offences and 16 for road traffic offences.

Dublin Circuit Criminal Court heard that one of Chubb’s victim’s suspected something was wrong after handing over a €900 deposit to Chubb, so she phoned him and asked for her money back.

After he reassured her, she apologised for doubting him, gave him another €2,000 and a box of chocolates by way of apology, the court heard.

Another of Chubb’s victims told gardaí the defendant handed him a key to the apartment and told him the property needed a few repairs and said he could move in the following week. This man took a photo of Chubb, who was using the alias Darren Hartigan, and later gave it to gardaí­.