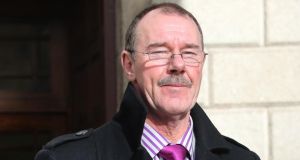 Joseph McGrath (58), Johnstown, Navan, Co Meath, sued Fingal County Council after being injured in a slip on the pier in Rush on July 27th, 2009. Photograph: Collins.

A man who slipped on algae on the steps of a Co Dublin pier as he was about to go for a swim has been awarded €59,050 damages at the High Court.

A self-employed barber, he broke his arm and twisted his ankle and was out of work for three months.

Mr McGrath claimed the council was negligent in failing to ensure the pier was safe. He alleged the council knew, or should have known, it was in a dangerous condition and popular among bathers.

The council denied the claims and argued Mr McGrath was liable or partly liable by failing to exercise any or adequate caution for his own safety. It was also argued he failed to negotiate the steps in a careful manner.

The court heard the accident happened when Mr McGrath, his 14-year-old son and his wife’s niece went swimming from the pier on a warm summer evening.

On his third time descending the steps, the court was told Mr McGrath slipped on a moss-like marine plant and fell heavily on his elbow. He slid down the remaining six steps and came to a rest on the seabed.

Awarding him €59,050, Mr Justice Daniel Herbert said he was satisfied the Council, as the authority responsible for the pier, knew members of the public were using the pier steps for swimming although they were originally built for boating purposes.

The council knew the steps were dangerous for swimmers but failed to take any proper or adequate precaution to prevent injury to recreational users, he said.

The evidence established the council had, by occasionally applying chemical sprays, made some effort to control the growth of algae on the steps, he said.

However, that was not enough to render the steps sufficiently free of algae and marine organisms so as to allow swimmers descend and ascend the steps safely.

To have accepted that risk but not to have taken any of the simple remedies available, including installation of a handrail, amounted to reckless disregard by the Council for the safety of recreational users of the pier, the judge found.

There was also no positive evidence Mr McGrath was in any way careless or incautious, he said.