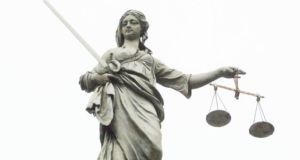 Kevin Braney (40), of Glenshane Crescent, Tallaght was among seven men brought before a special sitting of the non-jury court two years ago charged with membership of an unlawful organisation. Photograph: Alan Betson/The Irish Times.

A Dublin man charged with membership of the IRA has been granted temporary bail by the Special Criminal Court.

Kevin Braney (40), of Glenshane Crescent, Tallaght was among seven men brought before a special sitting of the non-jury court two years ago charged with membership of an unlawful organisation within the State namely Oglaigh na hEireann, otherwise known as the IRA on July 3rd 2013.

Mr Braney was granted temporary bail by the three-judge Special Criminal Court on Tuesday from May 26th until June 3rd on a number of conditions.

He was required to enter into his own bond of €100 to keep the peace and be on good behaviour while on bail, to surrender his passport and travel documents, reside at a given address except on one date when he is required to reside at an address outlined, sign on twice daily at a local garda station except on one date outlined, observe a curfew from between 7am and 7pm and provide a mobile phone number to gardaí­.

Mr Braney was also required to not contact any prosecution witnesses or associate with any co-accused, persons convicted or charged with a scheduled offence or on bail from the Special Criminal Court except for in the presence of his legal team while on temporary bail.

Counsel for Braney, Tony McGillicuddy BL, told the non-jury court that Mr Braney’s independent surety of €3,250 was present in court.

Mr Braney’s trial for alleged membership of an unlawful organisation is currently listed for June 9th next.