Approval of plan is a ‘matter of commercial life and death’ for firms, Supreme Court hears 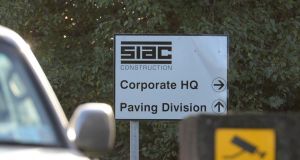 A last-minute challenge to court approval for a survival scheme for key companies in construction giant SIAC has placed the companies and the jobs of 219 employees “in peril”, the Supreme Court was told today. Photograph: Dara Mac Dónaill/The Irish Times.

A last-minute challenge to court approval for a survival scheme for key companies in construction giant SIAC has placed the companies and the jobs of 219 employees “in peril”, the Supreme Court was told today.

Approval of the scheme is “a matter of commercial life and death”, counsel for the company said.

The Chief Justice said the court would hold a priority hearing next week of the appeal by the Polish Roads Authority, owed some €70 million by SIAC companies, against the High Court’s approval of the scheme.

The scheme was due to come into operation yesterday but has now been deferred until next Tuesday, when a three judge Supreme Court will hear the appeal.

Bill Shipsey SC, for the PRA, a state authority, said its complaint is that it is unfairly prejudiced by the scheme as it does not allow for any dividend for those SIAC creditors making damages claims.

The PRA has paid out to some creditors of SIAC. The company itself is also involved in substantial litigation in Poland, claiming some €120 million arising from its involvement in road projects there.

When urging an early hearing of the PRA appeal today, Bernard Dunleavy, for SIAC, said the PRA appeal posed “enormous diffuiculties” for SIAC and was coming “very late in the day”. The Authority had only become involved in the High Court proceedings last Tuesday, he added.

He said a planned €10.5 million investment which is key to the scheme may not be available after next Tuesday and this was “a matter of commercial life and death” with 219 jobs “now in peril”.

The survival scheme was dependent on the €10.5 million investment but the investor had indicated the scheme must come into effect by next Tuesday, counsel said. If the Supreme Court reserved judgment on the appeal next Tuedsay, that may be too late as SIAC had no control over the investor, he added.

James Doherty, fort the companies examiner Michael McAteer, said the uncertainty caused by the appeal “casues all sorts of difficulties”, including with ensuring the companies’ banker creditors release securities and provide funding. He also supported an urgent hearing

Mr Justice Peter Kelly had last Friday given the go-ahead for survival proposals involving the €10.5 million investment in the company, with about €5 million going to secured banker creditors - Bank of Ireland, Bank of Scotland and KBC Bank, owed some €42 million.

Mr Justice Kelly noted the examiner was satisfied the scheme would place the companies on “a sound commercial footing” and they had an “impressive” list of contracts into the future.

The court previously heard the companies’ workforce could be reduced by 30 or 40 people under the scheme which involves the group being effectively split into two, an operating division and a property holding division.

An eighth SIAC company which had also been placed in examinership was wound up last month with the loss of eight jobs.