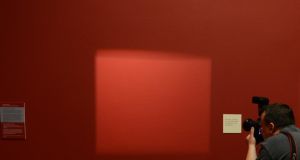 The jury in the trial of a man accused of putting his fist through a €10 million Claude Monet painting at the National Gallery of Ireland has retired to consider its verdict. Photograph: Cyril Byrne.

The jury in the trial of a man accused of putting his fist through a €10 million Claude Monet painting has retired to consider its verdict.

Andrew Shannon (48) has pleaded not guilty at Dublin Circuit Criminal Court to criminal damage of the painting at the National Gallery of Ireland in Dublin on June 29th, 2012.

Mr Shannon, of Willans Way, Ongar in Dublin, claims he “fell” against the painting in a momentary weakness brought on by his heart condition.

Judge Desmond Hogan told the jurors that if they have a “lingering doubt” based on a reasoned view of the facts, they must find the accused not guilty.

He also told the jury not to “manufacture your doubt. Don’t enter into a philosophical or idealistic discussion.”

Earlier, Kerida Naidoo BL, prosecuting, told jury members that the State did not have to prove a motive.

He said it was enough for the jury to establish that the damage was deliberate, without speculating on a motive.

“Sometimes a person’s motivation for doing something is so locked up in their mind, it’s impossible to know it,” he said.

In his closing speech, Mr Naidoo said the heart surgeon called on behalf of the defence gave evidence that was “directly at odds” with Mr Shannon’s explanation.

Surgeon Nicholas Walcott had said dizziness was not a symptom of Mr Shannon’s heart condition, and if the accused had collapsed, he would have lost consciousness and stayed down.

Brendan Grehan SC, defending, said while Mr Shannon’s explanation may seem “unusual” or even “unlikely,” he is entitled to the benefit of the doubt.

Mr Grehan also dismissed evidence about the force of the blow on the painting as “meaningless” as he said the canvas was “incredibly brittle and fragile” due to its age.

The 1874 painting, entitled Argenteuil Basin with a Single Sailboat, is valued at €10 million.

The jury of six women and five men will resume their deliberations tomorrow.