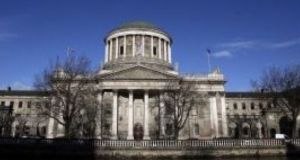 Mr Justice Seamus Noonan rejected an appeal by the couple over the dormer-type structure which is independent of their house at Kilmurry Lower, Baltinglass.

A couple who built a shed/workshop next to their Co Wicklow home without planning permission have lost a High Court appeal challenging enforcement proceedings against them.

Liam Lee and Jean Tompkins failed to establish the two-storey structure was built more than seven years before the local council brought proceedings against them.

No action can be taken, by law, if proceedings are not brought within seven years from the start of the development.

Mr Justice Seamus Noonan rejected an appeal by the couple over the dormer-type structure which is independent of their house at Kilmurry Lower, Baltinglass.

Mr Lee got planning permission from Wicklow Co Council for a two storey dwelling on the land in 2003 and built a house there.

Ten years later, in 2013, it came to the council’s attention a shed/workshop and a large brick screen wall was built without permission.

The council brought enforcement action in May 2014 requiring cessation of those unauthorised developments.

In 2015, the Circuit Court granted the council the order sought.

The dispute centred on whether the council was precluded from bringing proceedings by virtue of expiration of a seven-year period from the commencement of the development. Applications for retention of the structures were rejected by the council.

Mr Lee argued he was covered by the seven-year time bar because the work on the structures was “commenced” in 2004 and 2005.

He worked on them on a piecemeal basis after that, purchasing materials when he could afford them, he said. While the shed/workshop was started back then, it was not completed until 2010/11, he added.

The judge said a Google street street view image from March 2009 clearly showed, while the screen wall was present, the shed/workshop was not, or at least was not visible above the height of the wall.

A 2010 Google Earth image showed vehicles and/or containers in the area now occupied by the shed/workshop.

Similar images from 2011 clearly show the presence of the shed/workshop which appears to be fully or substantially completed, the judge said.

It was notable, he said, there was no evidence before the court as to what precise works were done by the respondents or when they were done.

All that the evidence appeared to establish was the concrete for the workshop floor was poured in April 2004 and foundations for the wall possibly in 2005.

It would be absurd to suggest that development had commenced because one block for a structure is laid and left in situ for 10 years before the building is constructed, he said.

The respondents had failed to establish the unauthorised development commenced more than seven years prior to the institution of these proceedings, he held.