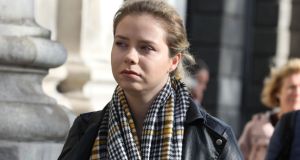 Aoife Bennett was 16 when she got the vaccine in December 2009 as part of a mass vaccination programme. Photograph: Collins Courts

The 26-year old woman who has sued claiming she developed narcolepsy after she got the Pandemrix swine flu vaccine has said within weeks she suffered waves of excessive tiredness.

Aoife Bennett broke down in the High Court as she told how she thought it was her responsibility to get the vaccine as the country faced a threatened swine flu pandemic 10 years ago.

“I thought it was my responsibility to get it so I would not pass it on to others,” she told Mr Justice Michael McGrath.

She told the court she would have “taken a chance on getting swine flu” and would never have got the vaccine if she thought there were serious risk factors.

Ms Bennett was 16 when she got the vaccine in December 2009 as part of a mass vaccination programme.

On Christmas Day 2009,she said she had to drag herself downstairs for lunch. “I was absolutely exhausted. Before this I was very energetic and active,”she said. She said she spent a lot of the Christmas holidays in bed and found it very difficult because she was “ very, very tired”.

When narcolepsy was diagnosed in 2011,she said she had never heard of it .

Ms Bennett, who gave evidence from a special comfortable chair, slept before the judge came out and she was sworn in to give evidence. She also had to take breaks during her testimony.

Ms Bennett said she loved sports at school and ran with a local athletics club. She said her only concern at the time about the vaccine was she might have a sore arm afterwards as she had to play a volleyball match that week.

She said there was “ a commotion” as students lined up for the vaccine. She said she asked to read a brochure but was told she did not need to read it.

“Somebody said she knew my father and there was nothing to worry about. I was reassured it was going to be fine,”she added.

She said she used to fall asleep in after-school study in early 2010 and had strange sensations in her legs. They would shake uncontrollably when she laughed and her legs and knees would buckle.

In the proceedings it is claimed HSE brochures on the vaccine had the effect of allegedly misleading those who read them as to the safety of the Pandemrix vaccine .

It is claimed that Glaxosmithkline demanded an indemnity from liability from the State before it would agree to supply the vaccine.

It is alleged that the Health Products Regulation Authority was aware there was an alternative vaccine which had more clinical data available.

All the defendants deny the claims and deny liability.