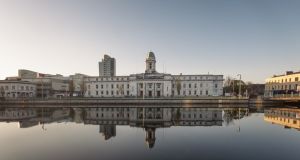 City Hall in Cork. The proceedings are against Cork City Council. Photograph: iStock

More than 20 members of a Traveller family have brought a High Court challenge over the five year Traveller Accommodation Programme adopted by Cork City Council.

The adults and children have been living on an unauthorised halting site in the city for the last 15 years without electricity or permanent toilet facilities.

They want the decision adopting the five year plan struck down over alleged failure to provide them with long term Traveller-appropriate accommodation.

The family, who cannot be identified by court order, say their unauthorised halting site is “thick with rats” and they remain in unsanitary conditions with limited washing facilities during the Covid-19 pandemic.

In judicial review proceedings against Cork City Council, they want an order quashing the December 2019 decision adopting its draft Traveller Accommodation Programme 2019-2024. They claim the adoption of the programme constituted a failure to vindicate their constitutional and human rights .

The proceedings are against Cork City Council. The Minister for Housing and the State are notice parties.

In an affidavit, the grandfather of the family said, before appropriate accommodation is allocated to them, they want essential services including access to electricity, hot and cold running water, and washing and toilet facilities.

He said lack of electricity has affected the education of the children on site as they cannot complete their homework after dark and the alternative is to do it by candlelight, which is a safety hazard.

He said the day-to-day living of the family is impacted because, without mains electricity, there is no way to heat the caravans apart from relying on solid fuel stoves which are a fire hazard.

The grandfather also said the site is “thick with rats” and he is very concerned about the risk to the family’s health.

He said water was provided from a pump in an adjoining field and three portaloos were provided over ten years ago. He said a comfort pod, to include toilet and washing facilities, was promised in 2018 but the history of its provision has been terribly frustrating and upsetting.

In March last year, the Council had said during a meeting at its offices it was not going to install the pod because of the cost of connecting to the water mains and that a septic tank was being considered instead, he said.

The comfort pod was finally provided just last April but they have to use a generator to power it, he said.

In May 2019, he said the family were offered a standard house or houses as a temporary measure but he was not given details of the address or how long they would have to stay there until a halting site was approved.

He said his family want Traveller-appropriate accommodation and would be willing to avail of modular type homes if they were located on a suitable site. He said the recently adopted programme, like previous three Traveller accommodation plans does not contain any detailed plans or commitment to end his family’s stay in the unauthorised halting site by providing alternative suitable accommodation.

The case will come back before the court in July.