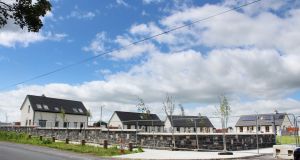 The council has made provision for Travellers who had resided on the bridge to be accommodated in a six unit group housing scheme, now ready for occupation, but said it needs the Cabragh Bridge site cleared first. Photograph: Simon Carswell

The High Court has made orders requiring members of the Traveller Community to vacate an unofficial halting in Co Tipperary by next Tuesday.

The orders were granted by Ms Justice Leonie Reynolds in favour of Tipperary County Council against eight persons whose presence at Cabragh Bridge, Cabragh, Thurles, the council alleged, constitutes a public nuisance.

Last week, the council got permission to serve short notice of the proceedings against the defendants. When the matter returned before the court on Thursday, David Humphries BL, for the council, said it had served the proceedings on the defendants and was seeking injunctions compelling them remove their mobile homes, vehicles and caravans from Cabragh Bridge, and not cause any obstruction to the roadway.

The council also sought orders requiring the defendants to vacate and cease residing on or anywhere in the vicinity of Cabragh Bridge, which it says is an inappropriate and unsuitable place to reside.

Counsel said the council had offered the defendants alternative accommodation, including at another halting site relatively close to the Cabragh Bridge site. That offer had been made some time ago and had not been accepted by the defendants but it “remained open”, he said.

There was no appearance by any of the defendants when the case was called on.

Ms Justice Reynolds said she was satisfied to grant the orders and directed the defendants must vacate the site by 5 pm on Tuesday July 16th. The court previously heard members of the McCarthy family have lived on the Bridge for 40 years. The bridge had formed a part of the R659 regional road and was left in place following the construction of a new section of that road some years ago.

The council has made provision for Travellers who had resided on the bridge to be accommodated in a six unit group housing scheme, now ready for occupation.

The defendants, who are alleged to have moved onto the Bridge site on various dates between 2015 and September 2018, are not being accommodated in the new scheme.