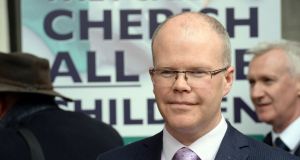 Aontú TD Peadar Tóibín, who interrupted High Court proceedings against a number of beef plant protesters by claiming to make representations on their behalf, was told by a judge he had no right of audience in the court. Photograph: Cyril Byrne/The Irish Times

A TD, who interrupted High Court proceedings against a number of beef plant protesters today by claiming to make representations on their behalf, was told by a judge he had no right of audience in the court.

Peadar Tóibín, the Meath West TD and Aontú leader, stood up in the public gallery during the call-over of cases and said he wished to inform the court that some named defendants had not been served with a summons and had no knowledge of the proceedings against them in relation to a protest at Liffey Meats, Ballinasloe.

Mr Justice Anthony Barr told Mr Tóibín he had no right to speak on their behalf and the politician left the court shortly afterwards without further attempt to participate in the proceedings. Judge Barr said he would be ensuring proper service had been made on anyone against whom the court contemplated making any orders.

Rory Mulcahy SC, who appeared with barrister Padraic Lyons for Liffey Meats Cavan and several other Liffey Meats franchises, told Judge Barr his client would not be proceeding on Tuesday against the defendants in whom Mr Tóibín had expressed an interest. They will be facing injunctive applications on Friday next.

Mr Mulcahy told the court that his clients were undertaking not to pursue Pearson, Shannon and Murphy for costs or damages to date as sought in summonses against them.

Judge Barr was told by barrister Anthony Thullier Kepak would not pursue the defendants for damages following their undertaking but no such undertaking was given in relation to Beef Plan Movement Company Limited who, although not fettered with restraining injunctions, is a defendant in this and a number of other proceedings by Kepak, Liffey Meats and Dawn Meats.

All orders restrain the named protesters and anyone acting with them or who has knowledge of the court orders from engaging in unlawful protests at meat plants.