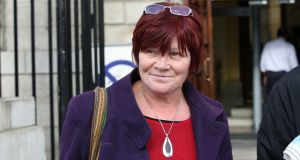 The Supreme Court will give judgment on Friday on the appeal by Independent TD Joan Collins against the rejection of her challenge to the Minister for Finance’s issuing of €31 billion promissory notes in 2009 for Anglo Irish Bank and other financial institutions.

The constitutionality of what the High Court described as the “far-reaching” legislation under which the notes were issued is a core issue in the appeal.

Ms Collins maintains the promissory notes were impermissibly issued without a Dáil vote in breach of constitutional provisions dealing with appropriation of public money.

The State pleads the Minister had power to issue the notes under a 2008 law, the Credit Institutions (Financial Stabilisation) Act, enacted by the Oireachtas with the aim of averting a banking collapse. The notes were security for the Central Bank continuing to provide emergency liquidity assistance for the banks after the government provided the bank guarantee of September 2008.

The case relates to promissory notes issued for Anglo, Irish Nationwide Building Society and Educational Building Society. Anglo and INBS were later nationalised and, after their successor, Irish Bank Resolution Corporation (IBRC), was wound up in 2013, the Anglo note, on which €25 billion was then outstanding, was converted into long-term Irish government bonds.

The EBS note no longer exists following the reorganisation of the finances of Allied Irish Banks, owner of EBS.

After a three-judge High Court rejected her case in November 2013, Ms Collins appealed to the Supreme Court.

The death of Mr Justice Adrian Hardiman earlier this year meant the appeal, which opened before a seven-judge court, finished last April before a six-judge court with judgment reserved.

Her lawyers argued a statutory power to charge the central fund is unconstitutional unless that charge is prequantified or there is an outer limit on it.

It is unconstitutional for the Minister to charge a public fund under statute unless the imposition of the charge has been considered in advance by the Dáil, they also argued.

Her counsel John Rogers SC said Ms Collins, as a citizen and TD, had a right to have the democratic process adhered to when the Minister decided to provide the promissory notes.

The 2008 Act, an “empty shell of an Act”, had relinquished the budgetary control of the Dáil, he said.

The State, through its counsel Michael McDowell, maintained the situation in 2008 was not “normal”. The Minister, it was argued, remained fully accountable to the Dáil and the Oireachtas was entitled, under the 2008 Act, to authorise the Minister to take the necessary steps to stabilise the financial position of the State.

The State later said it would not seek the substantial costs of that hearing against Ms Collins if she did not appeal.

When she did, the State sought its costs against her but the High Court refused that application and ordered the State to pay 75 per cent of the substantial legal costs incurred by the TD. She would have to pay the remaining 25 per cent herself, it said.

The case raised “exceptional” issues affecting the operation of the State’s finances, many of which had never been previously considered, the High Court said in its costs ruling.