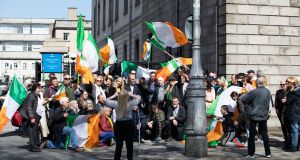 A view of supporters of John Waters and Gemma O’Doherty outside the Four Courts Photograph: Tom Honan

The State is to oppose a High Court challenge by John Waters and Gemma O’Doherty aimed at striking down laws introduced by the State arising out of the Covid-19 pandemic.

Mr Waters and Ms O’Doherty claim the laws are flawed and unconstitutional.

In judicial review proceedings against the Minister for Health, Ireland and the Attorney General they seek to have certain recently enacted legislation declared null and void by a judge of the High Court.

Their proceedings are also aimed at striking down temporary restriction regulations brought in under the 1947 Health Act.

Last week, the High Court directed the application for permission to bring the challenge should be heard on notice to the State respondents and the matter was returned for mention before Ms Justice Deirdre Murphy on Tuesday morning.

Prior to the hearing, more than 100 supporters of the plaintiffs gathered in the Four Courts complex. Some went into courtroom number one of the Four Courts while others congregated in the Round Hall outside the courtroom.

A small number of gardaí monitored the situation and cleared supporters from the courtroom before the judge came onto the bench just after 11am arising from social distancing guidelines introduced by the Chief Justice and the Presidents of the Courts arising out of the Covid-19 pandemic.

Gerard Meehan BL, for the State, told the judge it will oppose the application for leave to bring the challenge and asked for a two week adjournment to allow his side prepare a sworn statement in response to the “quite substantial” challenge.

While the State has been working on its response, things were taking longer to get done in the current climate, particularly when dealing with persons in the Department of Health, counsel said.

Given that part of the challenge concerns how the laws in question were enacted, the Dáil, the Seanad and the Ceann Comhairle would have to be added to the proceedings as notice parties, counsel added.

Mr Waters and Ms O’Doherty, represented themselves. While not not objecting to the addition of the notice parties, they expressed strong concerns about the adjournment application and said the leave application needed to be heard as soon as possible.

Outlining the nature of the action, Ms O’Doherty said what was happening regarding the lockdown was “outrageous”.

She said people were being held under mass house arrest or fear being interrogated by gardaí if they leave their homes.People should be allowed go about their business and normal life must be allowed resume, she said.

The vast majority of people are unaffected by Covid-19 which, she said, was “no threat to life”. The Irish people should be allowed to go outside and “build up a herd immunity”, she said.

Ms O’Doherty said expert medical evidence supporting her claims will be presented to the court as part of the case.

Ms Justice Murphy told Ms O’Doherty the court was not at this stage considering what were substantial arguments in the action but was making directions with a view to getting the application heard.

The judge said she accepted the leave application raised issues that needed to be heard and the leave hearing should be heard in two weeks time. The judge adjourned the matter for a week when it will again be mentioned for the purpose of an update on progress.

Earlier, both applicants raised issues with the judge as to whether the proceedings were being held in public. An application to let some or all of the applicants supporters into the courtroom was dismissed by the judge.

The judge said the case was being heard in public and was being reported on by bona fide members of the media. She said not everyone could fit into a courtroom and wondered, if a larger than capacity group wished to attend a hearing, should the court have to move to the National Convention Centre.

The applicants expressed their dissatisfaction over the judge’s decision. The judge said a digital audio recording of Tuesday’s proceedings should be made available to the applicants.