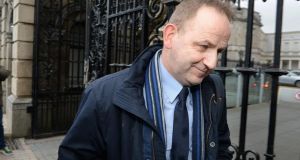 The State said while liability had been ‘conceded in full’ it was hoped the quantum of damages could be mediated. Photograph: Cyril Byrne/The Irish Times

The State has admitted liability in two of a number of claims brought against it by Garda whistleblower Maurice McCabe, the High Court has heard.

Mr Justice Kevin Cross was informed on Tuesday that liability had been admitted in a personal injuries claim brought by Mr McCabe against the Garda Commissioner, Ireland and the Attorney General.

Paul McGarry SC for Mr McCabe, who exposed abuses of the penalty points system within the gardaí, said while liability had been admitted in this particular case his client was seeking a hearing date when the level of damages Mr McCabe is entitled to can be assessed by a High Court judge.

Counsel said the personal injuries action was initiated in 2009, and the hearing of the assessment of damages should take two to three days to hear.

Liability had also been admitted in another case also against the same defendants, which was lodged in 2011, where Mr McCabe claims he was defamed, which is due to be mentioned before the High Court, counsel added.

Marguerite Bolger SC for the State defendants said while liability in the two cases had been “conceded in full” that it is her client’s hope that the quantum of damages could be mediated between the respective parties.

In reply, Mr McGarry said while a previous mediation had not been successful his side were ready to listen to what the State side has to say.

Mr Justice Cross said the court was happy to give the prospect of a successful mediation “every blessing”.

However, the judge agreed to fix the hearing of the assessment of damages in the personal injuries action to a date in early April.

No details of the exact nature of the claims were given in court.

The actions are two of a number of cases Mr McCabe has brought against parties including the State, the Garda Commissioner, the HSE and Tusla.

At the end of October Mr McCabe retired from An Garda Síochána, following 30 years service, weeks after the publication of the Disclosures Tribunal report in which Mr Justice Peter Charleton described the Cavan-based sergeant as having done the state “considerable service”.

The Tribunal found former Garda Commissioner Martin Callinan and Supt David Taylor had engaged in a smear campaign against Mr McCabe in response to his whistleblowing.

The report found that Mr McCabe was a genuine person who had the interests of the people of Ireland in his mind at all times.