Ruth Morrissey landmark judgment to be appealed by US lab, High Court told

Terminally ill Morrissey was awarded €2.1m over the testing of her cervical smear slides

Solicitor Cian O'Carroll reacts to news that Quest Diagnostics are appealling the landmark judgement in the case of his client, terminally-ill Ruth Morrissey, who was awarded €2.1million over the alleged misreading of her CervicalCheck smear tests. 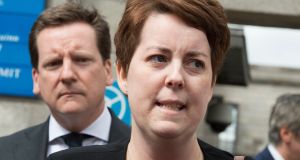 Ruth Morrissey and her husband Paul outside the Four Courts at the conclusion of her case. Photograph: Dave Meehan/The Irish Times

US laboratory Quest Diagnostics today confirmed before the High Court it is to to appeal the landmark judgement in the case of terminally ill Ruth Morrissey who last week was awarded €2.1million.

Quest Diagnostics is to appeal the decision to the Supreme Court and is to seek an expedited leapfrog appeal hearing directly to the highest court in the land.

Ruth Morrissey and her husband Paul who sued over her CervicalCheck smear tests were last week awarded a total of €2.1million by the High Court as she won her long running action.

Mr Justice Kevin Cross said Ruth Morrissey’s life had been ruined and she has suffered a life sentence which she is fully aware is expected to take effect within two years and for which there is no reasonable prospect of a reprieve.

She won her case against the HSE and two US laboratories in relation to the testing of her cervical smear slides in 2009 and 2012 in the landmark action relating to the CervicalCheck controversy.

Mr Justice Cross also ruled last week the HSE is entitled to an indemnity against the laboratories in respect of the entirety of the claim except for a €10,000 award relating to the the fact that Ms Morrissey was not informed of an audit review of her smear tests.

In the High Court on Friday, Counsel for Quest Diagnostics asked for a stay in the final orders in the case providing €400,000 is paid to Ruth Morrissey.

Counsel said the issue of “absolute confidence” in relation to testing would be an issue in the appeal to the Supreme Court along with the fact it believed too much weight had been attached to the audit results not being disclosed and the blind review of slides.

Mr Justice Cross in his ruling last week held in the Morrissey case that “absolute confidence” is the screeners practical duty in relation to their analysis of what is in a slide.

In his judgment Mr Justice Cross said the €10,000 against the HSE was nominal damages and while the HSE had admitted liability in relation to the non disclosure of the audit results, the wrong done to Ms Morrissey by the non-disclosure he said was not inconsiderable.

The judge also ruled Ms Morrissey must fail in the allegation of negligence against the HSE in relation to her care after her treatment in 2014.

Finding against US laboratory Quest Diagnostics, Mr Justice Cross said a reasonably competent screener at the relevant time should not have failed to see what was on Ms Morrissey’s 2009 slide. The cells on the slide the judge said as per the evidence of consultant cytopathologist Dr Michael McKenna had clear peculiarities, which showed themselves as being other than normal and this ought to have been seen by a competent screener.

“I believe the American screeners were utilising their professional skill and judgment and recording what they believed as a matter of proability was the case but that they ought not to have treated the slide as negative given the abnormalities as identified by Dr McKenna,” the judge said.

Referring to the 2012 smear test by the MedLab laboratory,the judge said that though it contained abnormal and non negative cells, the nature of these cells was such that the failure to record them as abnormal was not a breach of duty of care. However, MedlLab was negligent in failing to have the slide properly tested for adequacy. Had the adequacy test been conducted in accordance with the guidelines required by the HSE and its contract the judge said as a matter probability the slide would have reported as inadequate and Ms Morrissey would have been required to be retested between one and three months later.

He said she would have been spared the pain and distress of what followed and in particular her cancer would not have recurred.

Ms Morrissey and her husband Paul Morrissey, of Monaleen, Co Limerick had sued the HSE and two US laboratories, Quest Diagnostics Ireland Ltd with offices at Sir John Rogerson’s Quay, Dublin along with Medlab Pathology Ltd with offices at Sandyford Business Park, Dublin 18. It was claimed there was an alleged failure to correctly report her smear samples taken in 2009 and 2012 and her cancer spread unidentified, unmonitored and untreated until she was diagnosed with cervical cancer in June 2014. It was further claimed a review of the 2009 and 2012 smears took place in 2014 and 2015 with the results sent to Ms Morrissey’s treating gynaecologist in 2016, but she was not told until May 2018 of those results which showed her smears were reported incorrectly.

The HSE admitted it owed a duty of care to Ms Morrissey. The laboratories denied all claims.