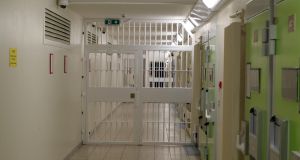 A man remanded in custody pending his trial on an attempted murder charge has brought a High Court challenge over his detention in the Midlands Prison segregation unit. Photograph: Colin Keegan/Collins.

A man remanded in custody pending his trial on an attempted murder charge has brought a High Court challenge over his detention in the Midlands Prison segregation unit.

Caolan Smyth claims that since he was moved to the prison months ago, he has been locked in his cell for 23 hours a day. He claims he has been told by the prison authorities that he is being kept away from other prisoners for his own safety due to a threat to his life.

Mr Smyth strongly disagrees with that assessment and rejects claims his life is in danger from other prisoners. He says his segregation from the general prison population is taking its toll on his physical and mental health.

The 28-year-old, of Cuileann Court, Donore, Co Meath, is charged with the attempted murder of James ‘Mago’ Gately, who was injured after being shot five times at a Topaz garage in Clonshaugh, Co Dublin, on May 10th, 2017. His trial is pending before the non-jury Special Criminal Court.

Represented by Keith Spencer BL, instructed by Niall O’Connor and Co Solicitors, Mr Smyth claims, as well as his detention in solitary confinement, that he is only permitted screened visits and is not given regular exercise.

He says he cannot avail of the educational, vocational and recreational facilities given to other prisoners due to the segregation. It is claimed the prison service has not provided any information to justify its claim he has been isolated from other prisoners for his own safety.

The conditions of his detention, it is alleged, amount to imposition of a punishment without any disciplinary hearings being conducted and amount to a breach of his rights under the Constitution and European Convention of Human Rights, including to bodily integrity.

He also claims his right to prepare for his trial is not being respected and he cannot get professional visits from his Dublin-based lawyers after 5.30pm on weekdays.

Arising out of the conditions of his detention, Mr Smyth has brought judicial review proceedings against the governor of the Midlands Prison, the Irish Prison Service and the Minister for Justice.

He wants various orders, including one quashing the governor’s decision to detain him in the prison’s segregation unit.

Mr Justice Senan Allen adjourned the matter to next month.

1 Coronavirus: What will reopen in Ireland’s phases to ease restrictions?
2 Next government could bring in work-from-home tax incentives – Taoiseach
3 Coronavirus: No new Covid-19 deaths reported in State for first time since March
4 Swimming ban at Dublin's Merrion strand due to poor water quality
5 Unconvincing account may take some heat out of Dominic Cummings controversy
Real news has value SUBSCRIBE