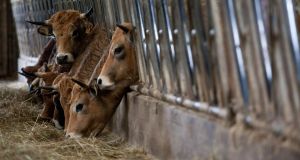 Peter Kingston said he “took exception” to claims made on behalf of the receivers that the farm, which included a thousand head of cattle, was in a poor state and required considerable expense by the bank to rectify. File photograph: Balint Porneczi/Bloomberg

The injunctions had been sought after the receivers claimed the Kingstons had earlier this month unlawfully retaken possession of the farmland the receivers had taken charge of last December.

The retaking of the farmland was something the Kingstons, who won the RTÉ television programme in 2014, were not entitled to do and they were now trespassing, it was claimed.

Barrister Stephen B Byrne, counsel for the receivers, who were appointed by ACC Loan Management, told Mr Justice Kelly the receivers had regained possession of the farm and the injunction was now being complied with.

Peter Kingston, who represented himself, told the court he was somewhat taken by surprise by the receivers’ proceedings as he had been away on a “religious retreat”, but accepted Judge Kelly’s contention the matter had not “come out of the blue” given there had been correspondence with the receiver’s lawyers prior to the injunctions being sought.

Mr Kingston said he had gone back onto the land to deal with ragwort growth, and to feed animals.

Mr Kingston he “took exception” to claims made on behalf of the receivers that the farm, which included a thousand head of cattle, was in a poor state and required considerable expense by the bank to rectify.

He said 11 cattle had died in the six months prior to him handing over possession of the land last December, but since the receivers had taken charge 200 had died.

Mr Byrne told the court any suggestion the farm was not in a poor state when the receivers took possession last year would be “hotly contested” by his clients.

Mr Justice Kelly agreed to adjourn the case for two weeks with the injunction to remain in place against all parties. This was to allow Mr Kingston to prepare a sworn statement in response to the receivers’ claims.

ACC Loan Management, which is owed €2.4 million by Peter and Tracey Kingston arising out of two mortgage agreements the parties had entered into almost 10 years ago, claims the farmland had been put up as security.

The Kingstons’ farm was at the centre of related High Court proceedings in April this year when Cork County Sheriff, Sinead McNamara, who was in the process of selling the Kingstons’ herd of 1,000 cattle, secured injunctions against businessman Jerry Beades and his New Land League group.

It was claimed Mr Beades and members of his group had engaged in protests over the proposed sale of the herd and Ms McNamara was granted an injunction preventing anyone interfering with the auction.