Professional Golfers’ Association seek to have ex-member jailed for contempt 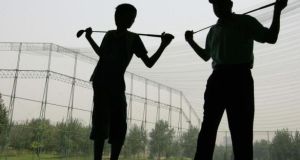 Professional golfer Kevin Beirth faces imprisonment for allegedly breaching undertakings he gave the High Court with regard to his holding himself out as a member of the Professional Golfers’ Association. Photograph: Frederic J. Brown/AFP/Getty Images

Professional golfer Kevin Beirth faces imprisonment for allegedly breaching undertakings he gave the High Court five years ago with regard to his holding himself out as a member of the Professional Golfers’ Association.

Barrister Stephen B. Byrne, counsel for the PGA, told Mr Justice Anthony Barr in the High Court on Friday that Beirth had breached undertakings he had given the court in 2013 under which he had promised not to hold himself out as a member of the PGA.

Mr Byrne was granted leave to issue proceedings seeking to attach and commit Mr Beirth to prison for contempt of court.

He told the court Mr Beirth had previously been a member of the PGA but had been expelled following a disciplinary process in 2012.

“Notwithstanding his expulsion from the Association he had continued to hold himself out as a PGA professional, passing himself off as a PGA golf coach and infringing trademarks of the Association,” Mr Byrne said.

Following legal proceedings which had ended with a settlement in 2013, Beirth had given the court undertakings not to provide any service allegedly endorsed by or associated with the PGA. He had also undertaken not to hold himself out to be an Irish PGA professional or a member of the International PGA.

Mr Byrne said that in the five-year-period since the making of High Court orders there had been periodic breaches of his undertakings but these had been rectified. Recently the PGA had become aware Mr Beirth was offering lessons at a golf centre near Swords and describing himself as a PGA instructor which he was not.

Although he had been contacted by phone during August and September and told of threatened legal proceedings against him he had not responded and his former solicitors had informed the PGA that they no longer represented him. It was believed the property where he previously resided had been rented out.

Mr Byrne told the court that there had been difficulties serving him with legal proceedings at his former address at Milesian Lawn, Feltrim, Swords, Co Dublin, and a summons server had been told he was out of the country for a number of weeks.

Judge Barr granted the PGA leave to issue a motion seeking his attachment and committal and returned the proceedings until next Friday. He allowed the Association leave to serve Beirth by leaving documents at his last known address, also with a neighbour and by e-mail.

The judge said he was satisfied Mr Beirth was acting in a deliberate and conscious manner in violation of the undertakings he had given to the High Court back in 2013 and that his conduct could constitute serious harm to the PGA and to its reputation and also to its commercial standing.

The Belfry-based Professional Golfers Association is most commonly referred to by the acronym, the “PGA,” and owns one of the best known sports brands in the world. It has an Irish regional office in Dundalk and has a registered trademark crest.