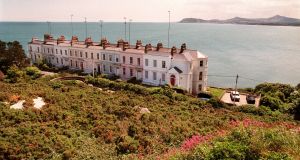 A local authority has agreed to quash planning approval for a bathing changing area already built at the home of a neighbour of filmmaker Neil Jordan, the High Court heard.

Mr Jordan and his wife Brenda Rawn objected to the enclosed flat roofed shelter/changing area in the rear of their neighbour Robin Power’s home at Sorrento Terrace, Dalkey, Co Dublin.

In November, the council approved the application.

Mr Jordan and his wife objected, as did Ian Lumley of An Taisce, who said the development was injurious to the architectural composition and design of Sorrento Terrace.

Mr Jordan and Ms Rawn appealed to An Bord Pleanála. Robin Power's house is on left (outlined in orange, with the home of Neil Jordan and partner Brenda Rawn next door (blue outline)

Their counsel, Michael O’Donnell, told Mr Justice Paul McDermott on Thursday the council had consented to an order quashing its decision.

It agreed to have the matter remitted back to the council on grounds that it failed to notify three prescribed bodies of the matter.

Counsel said the council was also consenting to paying his clients’ costs.

The judge said he would make the order sought.

An application for the costs of a notice party in the case, Mr Power’s consultants Elark, trading as Alternative Building Solutions, was withdrawn.

In their appeal to An Bord Pleanála, consultants for Mr Jordan and Ms Rawn said there had been a fundamental failure by the neighbour to abide by established rules and guidance for the development of Sorrento Terrace.

It was argued the terrace had, from its inception, conformed to very specific rules to ensure it and the protected structures within it, as well as the residential amenity of neighbours, has been preserved and protected.

The ad hoc extension of the structure in the manner carried out undermined the essential historical character of the structure and surrounding area from many protected viewpoints as well as from the sea, it was stated.

It would also depreciate the value of property in the vicinity, it was claimed.

Mr Power’s consultants argued the modest design of the shelter/changing room would not be visible from Sorrento Road or adjoining properties due to extensive existing screening and planting.