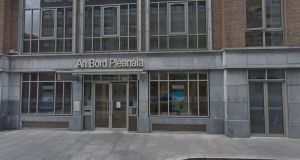 A Board inspector had in a report of June 2018 recommended permission be refused. Photograph: Google Street View

An Bord Pleanala has consented to an order quashing its permission for construction of a thermoplastic compounds production facility in Skibbereen, Co Cork.

At the High Court, the Board accepted its screening for appropriate assessment breached the requirements of a decision of the Court of Justice of the EU.

The matter will now return to the Board “to be decided in accordance with law”.

The consent order was made by Mr Justice Seamus Noonan on Tuesday in proceedings by Brendan McCarthy challenging the Board’s November 2018 permission for the facility at Poundlick, Baltimore Road, Skibbereen.

Mr McCarty, of Poundlick, represented by David Browne BL, instructed by O’Connell Clarke Solicitors, had alleged, among several claims, the Board’s screening for appropriate assessment breached the requirements laid down by the CJEU in a 2017 decision, People Over Wind and Sweetman v Coillte.

The consent order noted the Board accepted that was the case.

Mr Justice Noonan also made an order for costs against the Board in favour of Mr McCarthy.

The case was brought against the Board and the State with Daly Products Ltd, the proposed developer, and Cork County Council as notice parties.

Mr McCarthy got leave last January for judicial review of the Board’s permission for the thermoplastic compounds facility, comprising a two storey office/laboratory building and associate site works at Poundlick.

He and another man had appealed to the Board after the Council granted permission for the facility in December 2017.

A Board inspector had in a report of June 2018 recommended permission be refused.

The inspector said information submitted by the developer, particularly relating to noise and air quality, failed to demonstrate the proposed use of the site would be compatible with those amenities and the wider public health of residents of the area.

The inspector concluded it would be premature for the Board to conclude the proposed use constituted the type of light industrial use which the inspector considered appropriate for the site and location.

In November 2018, the Board decided to grant permission subject to 19 conditions.

It concluded, subject to compliance with the conditions, the proposed development site would be appropriate and compatible with existing industrial/commercial usage in the area, would not injure the residential or visual amenities, give rise to unacceptable environmental impacts or be prejudicial to public health.

In relation to air quality concerns, it was satisfied the mitigation proposed was appropriate.

Among his grounds of challenge to that decision, Mr McCarthy noted the site would be connected to the Skibbereen wastewater Treatment Plant which discharged to the Ilen river.

The Board inspector had concluded, subject to addition of a balancing tank for the cooling water, the proposed development could be serviced by the public water mains and the public foul and storm water sewerage system.

Mr McCarthy claimed the Board unlawfully took account of the balancing tank requirement as a mitigation measure when carrying out the screening for appropriate assessment.

He said no assessment could have been made of the efficacy of the tank where the details of that were to be agreed in writing between the developer and the council after the grant of development consent.

This breached various CJEU decisions, including in the case of People Over Wind and Sweetman v Coillte, he claimed.

Infant hurt after scrambler crashes into stationary quad in Dublin 09:40
Coronavirus: Dublin hospitals under ‘significant pressure’ as county set for Level 3 09:56
Trump envoy to Northern Ireland warns against hard border 08:48
Man due in court over robbery of wheelchair user in Cork 08:06
Number of H1 grades would have been ‘untenable’ without standardisation - Foley 06:27